HENRY CAVILL TO PRODUCE
AND STAR IN 'STRATTON'

If you are wondering what will our beloved Henry Cavill do outside being Superman in DC's movie universe, according to 'Deadline' he is opening his own production company Promethean Productions and their first project will be STRATTON, an action thriller based on eight novels by Duncan Falconer, a pseudonym for an author who used his own military background to inform the lead character. John STRATTON is an operative of the SBS who works with the Intelligence Detachment in Northern Ireland. Henry Cavill will play the character whose adventures take him from Kazakhstan and China to mainland Europe and London. And forgot to thank all of you people for helping HOLLYWOOD SPY get his 3,900,000th visitor last night! So many minions :)


'NOW YOU SEE ME 2'
DANIEL RADCLIFFE, JAY CHOU AND LIZZY CAPLAN JOIN THE

STELLAR CAST
You already know that NOW YOU SEE ME, which earned more than $300 million around the world last year, is getting a sequel and now new cast members and official plot have been revealed for the movie which will arrive into cinemas summer 2016! Daniel Radcliffe, Lizzy Caplan and Jay Chou have joined the old cast including Michael Caine, Mark Ruffalo, Morgan Freeman, Woody Harrelson, Dave Franco, Jesse Eisenberg who all play gifted magicians who like to organize heists using their tricks. One year after outwitting the FBI and winning the public's adulation with their mind bending spectacles, the Four Horsemen resurface in NOW YOU SEE ME 2 only to find themselves face to face with a new enemy who enlists them to pull off their most dangerous heist yet.


AMAZING 'CHAPPIE' SF TRAILER
HUGH JACKMAN, DEV PATEL AND SIGOURNEY WEAVER
Your trailer for today comes from Neil Blomkamp and it is for his new sf movie CHAPPIE which comes out next March starring Hugh 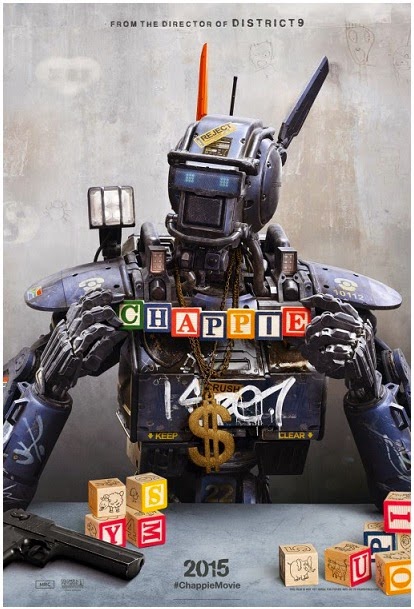 Jackman, Sigourney Weaver and Dev Patel! Every child comes into the world full of promise, and none more so than Chappie: he is gifted, special, a prodigy. Like any child, CHAPPIE will come under the influence of his surroundings - some good, some bad - and he will rely on his heart and soul to find his way in the world and become his own man. But there's one thing that makes CHAPPIE different from anyone else: he is a robot. The first robot with the ability to think and feel for himself. His life, his story, will change the way the world looks at robots and humans forever.
Posted by DEZMOND at 2:00 PM