Directorial project of our beloved Melissa McCarthy TAMMY is eyeing Susan Sarandon for the lead role! She could take the role 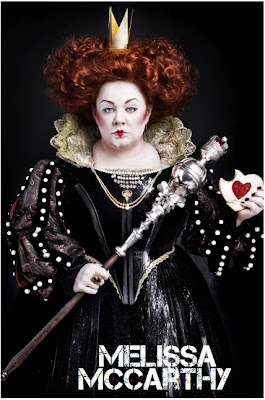 that Shirley MacLaine refused - that of an alcoholic grandmother in a story which follows the misadventures of a woman who is laid off from her fast food job, only to discover that same day her husband is cheating on her. She decides to take a road-trip with her foul-mouthed, diabetic grandmother who has a taste for whiskey. Kathy Bates will co-star as the grandmother's lesbian friend LOL who saves the two leads from a couple of rough spots in their journey across America. Methinks Shirley was crazy to refuse such a candy of a role :)

In sf news today, THR writes that Alex Garland, who penned DREDD last year, will direct sf movie EX MACHINA centring on a billionaire inventor who invites a young employee to his home to test his latest creation, an artificially intelligent female robot. Deadline reports that Disney is planning a remake of their classic PETE'S DRAGON which tells the tale of a young orphan who moves to a quiet fishing community with his sometimes invisible dragon Elliot. Melissa McCarthy's good friend Jason Bateman (you've seen them in IDENTITY THIEF) also has a new gig: he is producing FAMILY THERAPY, which follows a dysfunctional family who hires a therapist to fix their issues on the eve of a big family wedding.


RUFUS SEWELL IN HERCULES! KIEFER SUTHERLAND IN POMPEII
In epic news today - Rufus Sewell has joined HERCULES epic and will play Autolycus the son of the messenger god Hermes. Dwayne

Johnson plays HERCULES the son of Zeus who leaves the gods behind to live in exile as a mercenary for hire, along with his six trusted companions and is put to the test that makes him question everything he once believed. Aksel Hennie is playing Hercules' axe-wielding sidekick Tydeus while Ian McShane will play Amphiarus, a priest, prophet, and warrior who serves as Hercules' adviser. . At the same time, Kiefer Sutherland will play the villain in POMPEII epic set just days before the historic eruption of Mount Vesuvius in 79 A.D. Kit Harington plays Milo, a former slave turned gladiator, who must race back to save his true love Flavia (Emily Browning), and his best friend before it's too late. Kiefer Sutherland is portraying a Roman senator who enslaved Milo's village and forces Flavia's father (Jared Harris), Milo's master, to have his daughter marry the senator.
Posted by DEZMOND at 12:00 AM