LUKE EVANS TO STAR IN
'THE ALIENIST' PERIOD SET SERIES
In the long series of Hollywood movie stars who are moving over to the small screens, the latest one is our beloved Welshman Luke Evans! He and Daniel Bruhl

will lead new period set THE ALIENIST TV series at TNT!
An adaptation of Caleb Carr's novel THE ALIENIST is set in the Gilded Age of New York City in 1896, a city of vast wealth, extreme poverty and technological innovation. When a series of haunting, gruesome murders of boy prostitutes grips the city, newly appointed Police Commissioner Theodore Roosevelt calls upon criminal psychologist (or alienist) Dr. Laszlo Kreizler (Daniel Brühl) and newspaper reporter John Moore (Luke Evans) to conduct the investigation in secret. They are aided by a makeshift crew of singular characters, among them the intrepid Sara Howard, a young secretary on Roosevelt’s staff who is determined to become NYC’s first female police detective. Using the emerging disciplines of psychology and early forensic investigation techniques, this band of social outsiders tracks down one of New York’s first serial killers.


'HIDDEN FIGURES' POSTER
WITH TARAJI P. HENSON, OCTAVIA SPENCER, KEVIN COSTNER
You can also check out a new poster for Taraji P. Henson's new drama movie HIDDEN FIGURES which is out from January next year.  As the 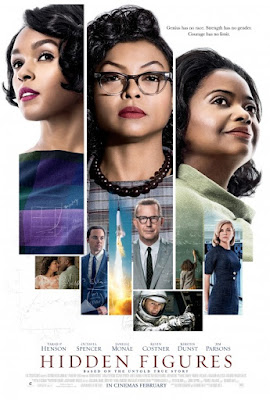 United States raced against Russia to put a man in space, NASA found untapped talent in a group of African American female mathematicians that served as the brains behind one of the greatest operations in U.S. history. Based on the unbelievably true life stories of three of these women, known as "human computers", we follow these women as they quickly rose the ranks of NASA alongside many of history's greatest minds specifically tasked with calculating the momentous launch of astronaut John Glenn into orbit, and guaranteeing his safe return. Octavia Spencer, Kevin Costner, Kirsten Dunst and Jim Parsons also star.