TO LEAD HBO SITCOM 'DIVORCE'
Television news from the comedy genre today for you, people, starting with Sarah Jessica Parker who is returning to HBO as she will lead DIVORCE sitcom as one half of a couple who undergo an extremely drawn-out divorce. She is also producing!
'GO JERROD GO' NBC SITCOM
Meanwhile, over at NBC half hour comedy GO JERROD GO will see comedian Jerrod Carmichael and Amber West playing a young couple, Jerrod and Maxine, who decide to move in together. However, when it comes time to inform Jerrod's parents, he finds every reason in the world not to tell them.

DANIEL WU TAKES THE LEAD
AMC has also found a lead for a series of their own: 'Deadline' reports that martial arts epic fantasy drama BADLANDS will have Daniel Wu as the lead!  The six episode series, loosely based on the Chinese tale 'Journey To The West' is set in a land controlled by feudal barons, telling the story of a ruthless, well-trained warrior named Sunny (Wu) and a young boy who embark on a journey across a dangerous land to find enlightenment. I've previously announced that the cast will also include Emily Beecham, Sarah Bolger and Oliver Stark.


'BILL' COMEDY TRAILER
SHAKESPEARE GOES HILARIOUS
And to bring you some cheer into the prefestive weekend, check out funny new trailer for British comedy movie BILL which explains what really happened during Shakespeare's 'Lost Years' - how hopeless lute player Bill Shakespeare leaves his family and home to follow his dreams 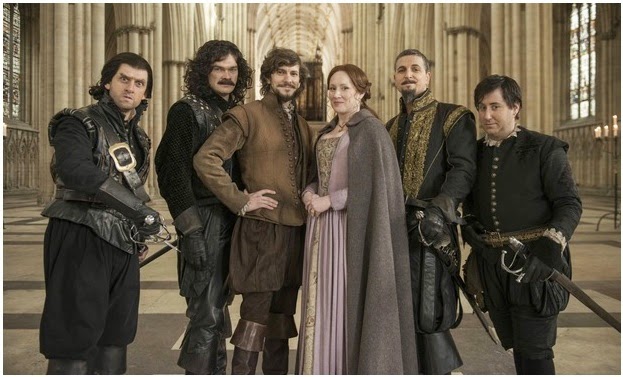 in London. Ready to open in UK next March the film will see "murderous kings, spies, lost loves, and a plot to blow up Queen Elizabeth". Mathew Baynton, Simon Farnaby, Martha Howe Douglas, Jim Howick, Laurence Rickard and Ben Willbond play 40 roles between them.
Posted by DEZMOND at 2:30 PM