into series! I've announced some time ago that it will be six part mini series about legendary Egyptian king Tutankhamun who was the youngest ruler to lead the ancient country. To air next year, with expensive marketing campaign, it will chronicle Tut’s rise to power and his struggle to lead Egypt to glory, while his closest advisers, friends and lovers scheme for their own nefarious interests: young Tut is thrust into power after the murder of his father. The neophyte ruler is forced to marry his sister in order to maintain the dynasty. Although Tut rules as Pharaoh, he is controlled like a puppet by three formidable men who plot against him and vie for the throne themselves. Against all odds, Tut grows from an insecure and manipulated prince to a hero on the battlefield, leading his kingdom into war and victory. Just as he takes control of his nation and his destiny, he is betrayed. With HBO's PHARAOH and HIEROGLYPH at Fox, this will be the third upcoming Ancient Egypt project.


RACHEL WEISZ JOINS
JANE FONDA, MICHAEL CAINE, HARVEY KEITEL IN 'YOUTH'
Here's a nice cast for you: Jane Fonda, Rachel Weisz, Harvey Keitel and Paul Dano have joined legendary Michael Caine in YOUTH movie which will follow Fred and Mick, two old friends approaching 80, who are on vacation together in an elegant hotel at the foot of the Alps. Fred, a composer and conductor, is retired, but film director Mick is still working. The friends contemplate their children’s lives, Mick’s enthusiastic young writers, and the other hotel guests as they face their future. While Mick scrambles to finish the screenplay for what he imagines will be his last important film, Fred has no intention of returning to music. But someone wants at all costs to hear his compositions and to see him conduct again. Who’s playing who is being kept close to the vest.

NEW 'HERCULES' IMAGE WITH
DWAYNE JOHNSON AND RUFUS SEWELL AS ANCIENT HEROES
And to finish in epic style, check out a brand new image from HERCULES historical adventure which will arrive into cinemas July

25th starring Dwayne Johnson as the legendary hero who is now a mercenary who must help the benevolent ruler of Thrace and his daughter in defeating a savage and terrifying warlord! The new picture 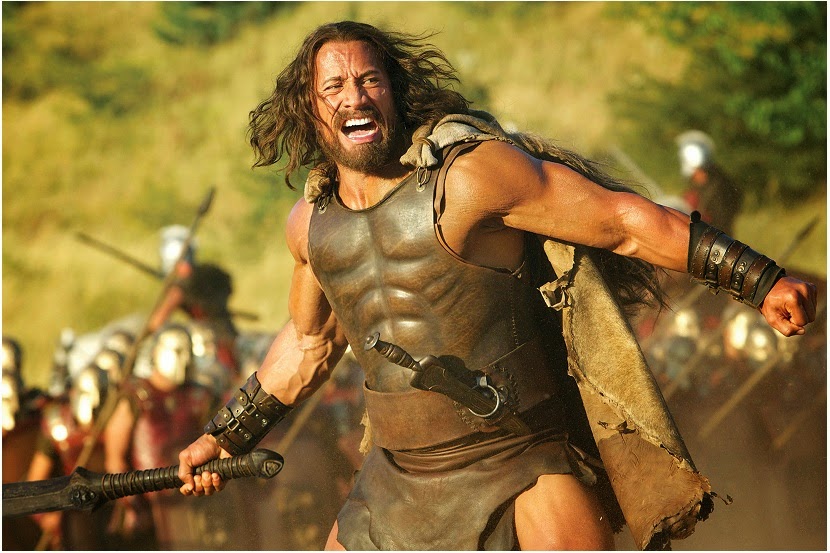 offers the first look of Rufus Sewell as Autolycus the son of the messenger god Hermes! The cast also has Joseph Fiennes, Rebecca Ferguson, Ian McShane and John Hurt!
Posted by DEZMOND at 2:20 PM