ROB ROY
EPIC TV SERIES
In TV news, Freemantle Media has announced their work on ROB ROY historical adventure TV series about the famous Scottish folk hero and outlaw of the early 18th century. Also including elements of humour, it will be set in Scotland with mythical creatures describing the repressive reign of English King George. It will focus on Robert Roy MacGregor's life story, giving it a contemporary update. Rob Roy and his group will set out on a journey to find the true King of Scotland. The action scenes and fantastical creatures will also have a steampunk overlay! I also reported last year that another Scottish hero - WILLIAM WALLACE - will be getting his own series too! And this summer over at Starz you shall watch Scotland set historical series OUTLANDER!

If you've ever asked why do people get possessed BRAIN ON FIRE might explain it to you: Charlize Theron has bought the rights on BRAIN ON FIRE MY MONTH OF MADNESS book by Susannah Cahalan with Dakota Fanning attached to star. The story follows a 24-year-old woman who just started a career as a reporter for the New York Post when out of nowhere, she became psychotic and violent, which lead to a month-long stay in the hospital that she doesn't remember! Baffled by her mysterious condition doctors were ready to commit her to a psychiatric clinic, when Dr. Souhel Najjar was brought on to examine her, and he asked her to draw one simple sketch which helped doctors diagnose her with a new auto-immune disease which caused her body to attack her brain, an illness now thought to be the cause of "demonic possessions" throughout history. 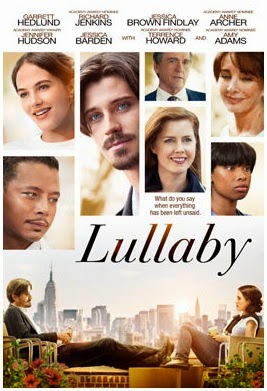 Our trailer for today is for new touching ensemble drama directed by Andrew Levitas called LULLABY! The stellar cast includes Anne Archer, Amy Adams, Garrett Hedlund, Richard Jenkins, Terrence Howard, Jennifer Hudson and Jessica Brown Findlay. The story of the drama, which comes to theatres this June,  revolves around a young man (Hedlund) who returns home to his family and his father (Jenkins), who has been battling with terminal cancer since his son was young. The family is forced to face the decision to take their father off life support and end his long suffering.
Posted by DEZMOND at 2:30 PM