Well, I was just about to quit watching ONCE UPON A TIME when it return to the second season this January since it kinda turned from

fantasy show into a crime or mystery one, and the lack of focus on the lead characters has watered down the whole series, but they do plan to have new cast additions so I might very well give them another chance: first the most amazing news is that wonderful Julian Morris, who so brilliantly (show's co creator Adam Horovitz praised him personally in a recent tweet) portrayed Prince Philip at the beginning of the season but was then killed off, will return to the cast! Two new names will be Rose McGowan who will appear in an origin episode as young version's of Regina's mother Cora (played by Barbara Hershey), stunning Chad Michael Collins will play Doctor Frankenstein's brother Gerhardt, while Ethan Embry will also join them in an unknown role!


HANSEL & GRETEL WITCH HUNTERS TRAILER 2
Your first trailer in the new year, my little freaks, will be the second trailer for a rather unfortunate movie HANSEL & GRETEL: WITCH HUNTERS. The bizarre movie adaptation of the famous kids fairy tale was first 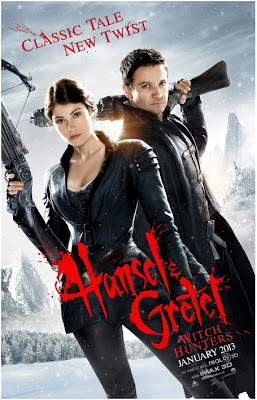 supposed to premiere in 2012 but was moved to January this year, a month known as the graveyard for films. After getting "a taste for witch blood" during their original adventure in the gingerbread house, the famous siblings Hansel and Gretel grow up to become warriors fighting against the forces of supernatural evil. 15 years later, the pair find themselves subject to a plot to end their threat to the witches. The new trailer shows us more of the siblings, revealing something of their fairytale past and their transformation into bounty hunters. As you know, the lead roles went to Gemma Arterton and Jeremy Renner with Famke Janssen as the main witch. The film is out January 25th in USA.
Posted by DEZMOND at 12:00 AM