Amazing news from the epic front today! Our favourite scribe Michael Hirst, who created THE TUDORS and is now writing VIKINGS for History Channel, will pen ALEXANDER historical series! 8 to 12 part series will depict
the life of Macedonian commander Alexander the Great, the military genius who conquered most of the known world before his death at 33! To be produced by German companies and with the idea to have three seasons, the show will start shooting next year. Another upcoming historical show will be THE INQUISITION, to be directed by Oscar winner Bruce Beresford (DRIVING MISS DAISY)! Internationally produced ten part lush and luscious series set in the 15th century Spain will follow the life of Diego Altas, the royal court doctor to Queen Isabella of Aragon. Born Benjamin Levi, Altas is a converted Jew, forced to denounce his heritage. At the same time, Altas uses his powerful position to resist the destructive forces of the Inquisition as he tries to save the last vestiges of religious co existence between the Moors, Christians and Jews. The clash of court and papacy in 15th century Spain is also ripe for the personal and powerful intrigue, sex and violence that’s typical of today’s global dramas and mini-series. The production should start later this year.


HOLLYWOOD SPY HEADLINES
Warner Bros. is preparing an unusual time travelling adventure: ROME SWEET ROME will follow a group of modern day soldiers
who are sent back through time where they get forced to fight against Roman legionaries. Speaking of unusual fantasy projects, "Variety" reports that Rob Liefeld's comic book GODYSSEY will be made into a movie telling a Greek mythological tale that sees Zeus, Buddha, Ra and Pangu battle against a legion of fallen gods to save humanity. In TV news, TNT has picked up Rebecca Romijn's new drama KING AND MAXWELL to ten part series. Based on David Baldacci's novels the series will have Rebecca Romijn as Michelle Maxwell and "The Closer"'s Jon Tenney as Sean King - a pair of former Secret Service agents who now operate as private investigators. TNT will soon also announce whether they will pick up Michael Bay's apocalyptic pilot THE LAST SHIP to series as well. That one stars Rona Mitra and Eric Dane. 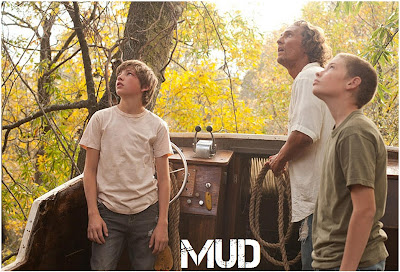 and his unlikely friendship with fourteen year old Ellis (Tye Sheridan). Ellis is determined to help his new friend escape from both the law and some very serious bounty hunters, in order to reunite Mud with his soul mate, Juniper (Reese Witherspoon)! The film will start its cinematic life later in April.
Posted by DEZMOND at 12:00 AM