Now these are certainly exciting pieces of news: according to "Digital Spy" British rose Emily Blunt is the top contender for the lead role

in the movie adaptation of GONE GIRL bestseller by Gillian Flynn which was sold in over two million copies last year. To be produced by Reese Witherspoon (who was originally mentioned for the role) the movie will tell the story of a man who comes home to discover his wife has disappeared - the story then alternates between the perspectives of the husband and the missing wife herself. Charlize Theron has also been mentioned for this role, while names mentioned for the lead male role include Michael Fassbender, Jon Hamm and Ryan Gosling. 20th Century Fox has paid $1,5 million for the movie rights! We shall see Millie Blunt at the Golden Globes later this month since she is nominated for best comedy/musical actress for SALMON FISHING IN THE YEMEN!

THE GALAXY are continuing: after a bunch of uber cool names, from Eddie Redmayne and James Marsden to Zachary Levi, Jim Sturgess and Lee Pace, have been mentioned for the lead role of Star-lord, the new actors thrown in the game are Emily Blunt's hubs John Krasinski, Joseph Gordon Levitt and even SMALLVILLE's Michael Rosenbaum. One of them will get the role of the intergalactic policeman and the leader of the Guardians. Meanwhile Old Spice advert star Isaiah Mustafa, Brian Patrick Wade and former WWE Superstar Dave Bautista are in the running for the role of Drax the Destroyer, the green-skinned warrior created with the sole purpose of destroying villainous Thanos! 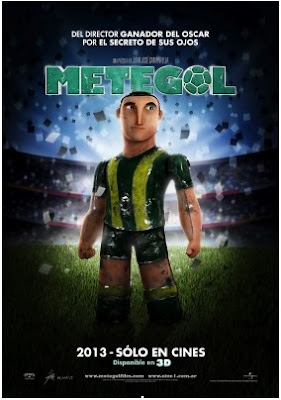 Here's another delightful trailer for you - it is for Argentinian animated film METEGOL coming from famous director Juan Jose Campanella. The film tells the story of Amadeo, a shy but talented boy, and of a foosball team that is trying to get back together after having been dismantled. With the help of the foosball players, Amadeo will have to face his most terrible rival on the football pitch: the Champ. Guided by their leader, the charismatic Right Winger, the foosball players and Amadeo will set off on a great adventure together, like a true team, to get back the dignity that the Champ stole from them.
Posted by DEZMOND at 12:00 AM