And after our Sunday spotlight on upcoming Asian epics, here are some more movie news from Asia: "Deadline" reported last week that one of the most famous Asian epics CROUCHING TIGER, HIDDEN DRAGON is getting a sequel! With the production scheduled to start this May, the film will be helmed by Ronny Yu which is a rather strange choice since he is known for gorry horrors such as BRIDE OF CHUCKY and FREDDY VS JASON, but he did direct Jet Li's FEARLESS too!  The story of the sequel will be based on SILVER VASE, IRON KNIGHT, the fifth book in Wang Du Lu's Crane Iron
pentalogy which revolves around the Yu Shu Lien character which was portrayed by Michelle Yeoh in the original movie directed by Ang Lee! And Asian anime ROBOTECH will also get a live action film adaptation since Warner Bros. has hired Nic Mathie to helm the project. As "THR" reports, the story is set in a future where humans have developed massive robots from a downed alien spacecraft on a South Pacific isle. Humanity is forced to battle waves of unrelenting invaders, while the fate of the planet has been put into the hands of two young pilots.


MOON INDIGO TRAILER
Are you up for something strange and unusual today? If yes, than I have the first trailer for bizarre French drama MOON INDIGO which will open up in French cinemas this April directed by Michel Gondry (can't say that I 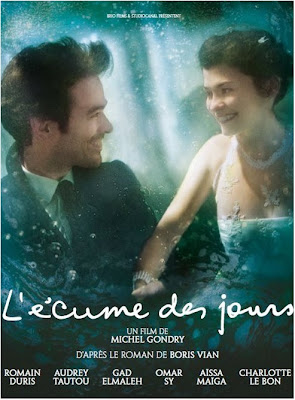 personally like his work since he directed THE GREEN HORNET and wrote ETERNAL SUNSHINE OF THE SPOTLESS MIND)! In a world where you can travel around on a pink cloud or literally be swept off an ice-skating rink into a hole, Colin (Romain Duris), a wealthy young man and inventor of the cocktail-mixing piano, wants to fall in love. With the help of his cook Nicolas and best friend Chick, he meets Chloe (Audrey Tautou), the incarnation of a Duke Ellington tune. But soon after their wedding, Chloe falls ill. She has a water lily growing in her chest. Ruined by medical expenses, Colin resorts to increasingly desperate methods to save his beloved's life!
Posted by DEZMOND at 12:00 AM