Now you know that we love our Michael Fass My Benders in all possible shapes, but we do prefer him scantily clad with a sword in his hands, just like we loved him as amazing Stelios in 300 and as the brave CENTURION. According to "Variety" he will fulfil our wishes again: Michael Fassbender 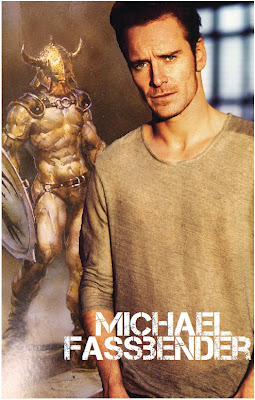 is set to play the legendary Celtic warrior CUCHULAIN in an epic film he is preparing with screenwriter Ronan Bennett. Cuchulain is the central character in the Ulster Cycle, an epic series of Old Irish legends that date from around the 8th century. Set in the northern part of Ireland, the saga relates the story of the Ulaid tribe headed by King Conchobar, and particularly its conflict with the rival Connachta tribe led by Queen Mebh. The most prominent figure in the legends is Conchobar's nephew Cuchulain, who has semi-divine ancestry and superhuman fighting skills. In the most famous story, known as the Cattle Raid of Cooley, he is the only man capable of resisting the vast army sent by Medb to steal Conchobar's prized white bull.

HOLLYWOOD SPY HEADLINES
And speaking of Michael Fassbender, "MovieWeb" reports that the sequel to X-MEN: FIRST CLASS, which wasn't overly successful but was good enough, will circle around Fassbender's Magneto much more than in the first part. Meanwhile, three British beauties Anna Friel, Tamsin Egerton (from the horrid CAMELOT show) and Imogen 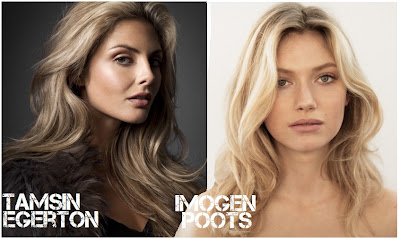 Poots (who starred next to Fassbender in CENTURION) have all joined Steve Coogan in THE KING OF SOHO, in which Coogan plays Paul Raymond who was dubbed The King of Soho because of the vast fortune he built through real estate properties and his pornographic productions. The plot will focus on both his personal and professional life. It is interesting that the film will be directed by Michael Winterbottom from A MIGHTY HEART.

And I have a new poster for the film which is coming out this April: LOCKOUT which has apparently taken back its old name after fans got shocked with the title MS ONE: MAXIMUM SECURITY. The film, produced by famous Luc Besson, was shot last winter in Serbia and 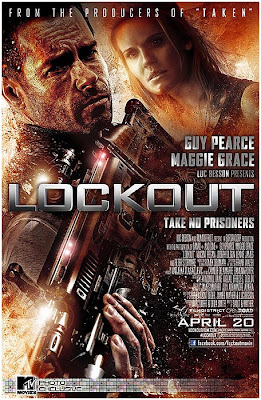 the story is set in outer space with Guy Pearce playing a man wrongly convicted of conspiracy to commit espionage against the U.S. He is offered his freedom if he can rescue the president's daughter (Maggie Grace) who is held hostage in an outer space prison that orbits 50 miles above the earth and is home to 500 of the most dangerous violent criminals on the planet who have taken it over. The film has two directors - Stephen St. Leger and James Mather, and is produced by Besson's "Europa Corp" studio, while their partner in Serbia is "Work In Progress" company which has worked on Ralph Fiennes' movie CORIOLANUS and THE BROTHERS BLOOM with Rachel Weisz and Adrien Brody which were also shot in Serbia. The budget of the film was around $30 million.
Posted by DEZMOND at 12:00 AM