According to "Variety" Mike Johnson, who worked with Tim Burton on CORPSE BRIDE, is going to direct OZ WARS, a new CGI/stop-motion film.  In the dark version of famous THE WIZARD OF OZ,  poor Dorothy will fight against warrior witches, black magic, martial artists and monsters in her journey set in contemporary times. 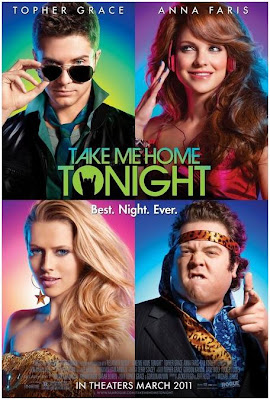 Ah, since it's boring Thursday in the news department, I have nothing else interesting to offer you today except the first entertaining trailer for TAKE ME HOME TONIGHT,  a charming comedy which will bring us a lot of 80's vibes, fashion and music next March telling us the story from the summer of 1988 about three friends on the verge of adulthood who attend an out-of-control party in celebration of their last night of unbridled youth. Recent MIT grad Matt Franklin (Topher Grace) should be working for a Fortune 500 company and starting his upward climb to full-fledged yuppie-hood. Instead, the directionless 23-year-old confounds family and friends by taking a part-time job behind the counter of a video store. But Matt's silent protest against maturity comes to a screeching halt once his unrequited high school crush, Tori Frederking (Teresa Palmer), walks into the store. When she invites him to an epic, end-of-summer party, Matt thinks he finally might have a chance with the girl of his dreams. With his cynical twin sister Wendy (Anna Faris) and best friend Barry (Dan Fogler), Matt embarks on a once-in-a-lifetime evening. From stealing a car to a marriage proposal to an indescribable, no-holds-barred dance-off, these friends share experiences that will change the course of their lives on one unforgettable night in the Go-Go '80s.
So, what's your favourite 80's song?
Posted by DEZMOND at 1:50 PM