'THIS BEAUTIFUL FANTASTIC'
LIFE CAN BLOOM INTO SOMETHING 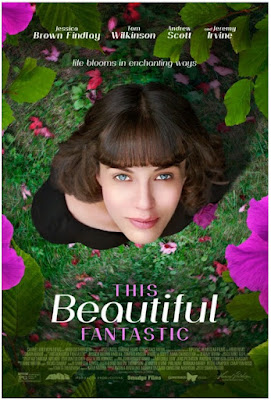 BEAUTIFUL
We're all light and fun today, spylings, beginning with the new trailer and poster for THIS BEAUTIFUL FANTASTIC cheerful drama starring Jessica Brown Findlay as a young woman who dreams of being a children's author and makes an unlikely friendship with a cantankerous, rich old widower played by British acting legend Tom Wilkinson. Dashing British lad Jeremy Irvine plays her love interest in this enchanting big screen tale ready to delight you this spring in cinemas after already playing in Russia and parts of Europe.


2017 PILOT ORDERS FOR
CBS MULTI CAMERA SITCOMS
It is that time of the year when networks are ordering comedy pilots, so here are the latest multi camera sitcom picks: CBS has set David Walton and Matt Murray to lead 9J, 9K AND 9L,

about a man who lives in apartment 9K in the building he grew up in, sandwiched between his parents’ apartment, 9J, and his brother, sister in law and their baby’s apartment, 9L, and his attempts to set boundaries with his intrusive but well meaning family. CBS also has BROTHERED UP pilot about an emotionally guarded black cop who is partnered with an emotionally available Pakistani cop and they are forced to find a way to connect as they patrol a Detroit neighbour hood.
ABC SITCOMS
ABC has, meanwhile, ordered an untitled comedy about an intellectual but emotionally challenged single dad who moves to Queens with his two young daughters and forms an unlikely family with the other residents in their apartment building. They've also ordered a pilot for Carol Burnett's HOUSEHOLD NAME about a family who gets a chance to buy the house of their dreams but under extremely abnormal circumstances: They must live with the current owner, an eccentric, larger than life actress (Burnett), until she dies.

This Beautiful Fantastic looks interesting to me. Thanks for sharing.

So many good shows too little time! Huhu...

9J, 9K AND 9L is a horrible name for a sitcom. Hope they change it because it actually sounds like a decent show. The name almost kills it for me though.

true, it is very weird. I do like it, though, when sitcoms are set in buildings

such is the modern predicament

be welcome, glad you liked it

This Beautiful Fantastic is on my ever growing list of movies to watch. I need to see what becomes of her overgrown yard, being somewhat obsessed with garden makeovers.

I have a feeling the final scene with the reveal will be either disappointing or it will come gradually so it won't be a boom :) I hope she changes those awful clothes too

This Beautiful Fantastic sounds like a lovely movie to watch.

So many shows, so little tea. Um time.

Another sitcom from Queens, NYC? let's watch it :)..and This Beautiful Fantastic trailer looks nice..

there is always time