'REBEL IN THE RYE'
SALINGER BIOPIC WITH NICHOLAS

HOULT AND KEVIN SPACEY
We're having a veteran star working with a younger actor day today! If you like literature you might find this one interesting: Oscar Winner Kevin Spacey has joined Nicholas Hoult in REBEL IN THE RYE biopic on J.D. Salinger! With young Nicholas playing the writer himself, Spacey will portray Whit Burnett, a professor at Columbia University and editor of Story Magazine who became an early mentor to the writer and became the first to truly challenge him and broaden his horizons as a storyteller. The film itself depicts how, after his rebellious youth and the bloody front lines of World War II, Salinger soared to the heights of the literary world but left it all behind for a life of seclusion.

'Deadline' reports that he would play Michael, a young idealist who lands his dream job as a program coordinator for the UN’s Oil for Food program. He is thrown into an already fraught post-war Iraq where government agents and power hungry Western countries are circling the country’s oil reserves like sharks. He seeks answers from the one person he thinks he can trust, Pasha (Kingsley), his boss, a seasoned diplomat. The more Michael learns, however, the more he suspects a conspiracy at the highest level. The only way out will be to expose it all — risking his own life, his mentor’s career, and the life of the Kurdish woman he loves. 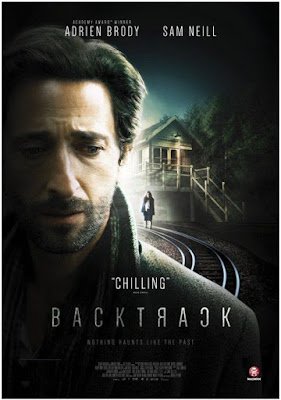 And the last in our theme today - a mix of Adrien Brody and Sam Neill in the first trailer for BACKTRACK thriller in which Brody plays psychologist Peter Bower whose life is thrown into turmoil when he discovers that the patients he has been seeing are ghosts. Risking his own sanity, Peter delves into his past to uncover a terrifying secret which only he can put right. BACKTRACK is a spine-chilling story from the acclaimed writer-director, Michael Petroni out in UK next week!
Posted by DEZMOND at 8:09 PM