Our favourite of Hollywood hunks, Chris Evans is one of those big blockbuster stars that also like to give strong dramatic performances and one of such is expected to be seen in the latest movie he has joined: in GIFTED he will play an underachiever named Frank Adler, a man raising his young niece Mary in rural Florida, who is quickly labelled as gifted after she starts school. Frank soon finds himself locked in a custody battle, fighting the girl's mother Evelyn for the right to raise Mary - and he's prepared to sue.The movie is to be helmed by SPIDERMAN director Marc Webb.

In today's sf news, Australian science fiction adventure SFv1 has added Isabel Lucas from IMMORTALS and TRANSFORMERS and Luke Ford to the cast lead by Kellan Lutz and Rachel Griffiths. Set in the future when humanity has spread out into interplanetary colonies, the film follows Sy (Kellan Lutz) , a drifter who falls in with Kane (Daniel MacPherson), an off-world military contractor trying to rescue his daughter Indi from peril while evading a global crisis caused by the military contracting company he works for.
'DAWN' SF NOVEL TO BECOME TV SERIES
Meanwhile, Octavia E. Butler's sf novel DAWN, from her Lilith’s Brood saga, will be turned into a TV series by Allen Bain. The sci-fi tale tells of humanity’s last survivors who are saved by an ancient alien race just before the destruction of the earth. They are given the choice of either mating with the aliens to create a new mixed species, or die as the last humans. 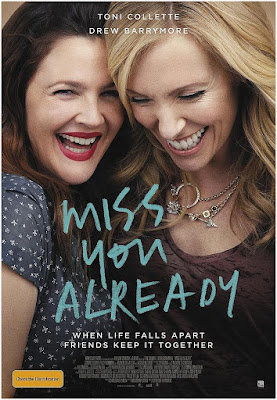 November. It is an honest and powerful story following two best friends, Milly (Toni Collette) and Jess (Drew Barrymore), as they navigate life's highs and lows. Inseparable since they were young girls, they can't remember a time they didn't share everything... Secrets, clothes, even boyfriends... But what happens when both are hit with life-altering news - one has cancer, the other gets pregnant.  The drama celebrates the bond of true friendship that ultimately can never be broken, even in life's toughest moments.
Posted by DEZMOND at 1:00 PM