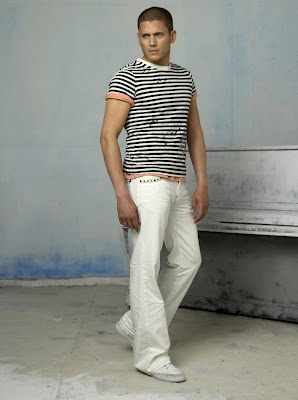 Just when I thought that thanks to the popularity gained in "Prison Break" charismatic and talented Wentworth Miller would get himself some interesting Hollywood roles, he found an episode one in a who-knows -which -sequel in a not-that -good franchise.
He will apparently play in "Resident Evil: Afterlife". He will be a guy whom Milla Jovovich and Ali Larter will lock up in a jail not knowing whether he is one of the zombies or not. In the movie, Milla continues with her efforts to expose the virus which could cause the extinction of the whole mankind, so while roaming the world she comes upon a jail in ruined L.A. surrounded by the half-dead creatures.
Paul W.S. Andreson will direct again and the movie is supposed to come out in summer 2010.
Posted by DEZMOND at 10:36 PM