EXCLUSIVE PICTURES AND SPOILERS FROM "SEX AND THE CITY 2" 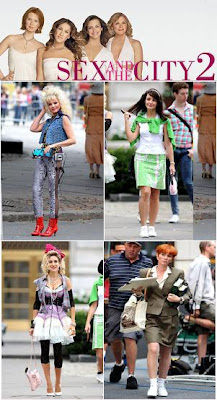 The shooting of the sequel of the mega successful "Sex and the City" movie is well under way. Although the story is still kept secret new pictures from the set are appearing daily. The latest are these on which you can see our beloved girls dressed in the 80's style. Apparently the movie will have "a jump into past" scene, back into the 80's when the girls came to New York for the first time. As you can see, Samantha was very blondish, while Carrie was a Madonna impostor :)
Judging from the first gossips Carrie and Big will have love problems due to the economic recession, Samantha goes back to Smith Jerrod afraid from the new attack of cancer, Miranda is sued for malpractice so she opens a restaurant with Steve. Charlotte thinks Harry is cheating on her but he's just sneaking around with a contractor trying to build her a dream house.
There will also be a huge wedding scene, and apparently it will be the crowning of Stanford's and Anthony's gay union :)
Posted by DEZMOND at 5:21 PM