Finally some justice! Toni Collette won an Emmy last night for best outstanding actress in a comedy series. Last year she amazed us all with her charismatic portrayal of a mother with multiple personalities in "United States of Tara". The role, written by Diablo Cody, is one those profound and multilayered ones which can be tackled only by the most talented of actors. Toni Collette did it so flawlessly and with such stunning ease that her victory is without a doubt one of the most deserved ones in the history of Emmy awards.
Toni was previously nominated for Emmies, Oscars, Baftas and she won a Golden Globe at the beginning of her career.
Looking gorgeous in her red gown she was presented the Emmy by equally gorgeous Justin Timberlake. 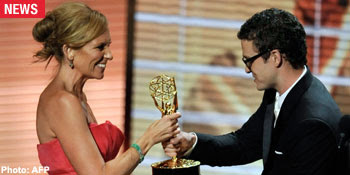