'HIS DARK MATERIALS' EPIC SAGA
JAMES MCVOY IS LORD ASRIEL!
Such splendid news! After casting little Dafne Keen in the lead role for their epic adaptation of Philip Pullman's fantasy saga HIS DARK
MATERIALS (which was previously made into Golden Compass movie), BBC has cast James McAvoy in the lead male role in the eight part TV series! He will be noble explorer Lord Asriel the father of Lyra! Dafne Keen will star as Lyra, a girl from a parallel universe, in which science, theology and magic are entwined. Her search for a kidnapped friend uncovers a sinister plot involving stolen children and turns into a quest to understand a mysterious phenomenon called Dust. She is later on joined by Will, a boy who possesses a knife that can cut windows between worlds. As Lyra learns the truth about her parents and her prophesied destiny the two kids are caught up in a war against celestial powers that ranges across many worlds! Clarke Peters will play the master who raises Lyra whose mother Marisa Coulter will be played by Ruth Wilson! This epic saga has three books - Northern Lights, The Subtle Knife and The Amber Spyglass! Oscar winner Tom Hooper directs! 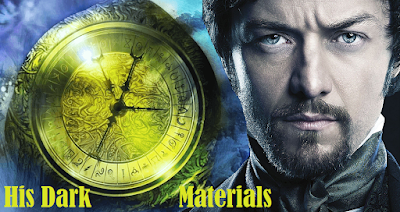