'ROBIN HOOD: THE REBELLION'
POSTER AND TRAILER ARE HERE!
What better way to start a new working week than with some epic news on period set projects? Two of our favourite mediaeval swordsmen today,
beginning with the one from the Sherwood Forest! While we re waiting for the Robin Hood movie withTaron Egerton and Jamie Dornan to hit the big screens around the world later this November, there is another movie project on the same topic coming to theatres around you this year!


Today, you can check out the first poster and trailer for ROBIN HOOD: THE REBELLION which will see British TV actor Ben Freeman playing the famous avenger who is trying to free his beloved Maid Marian (played by Marie Everett) from evil and cunning Sheriff of Nottingham (played by James 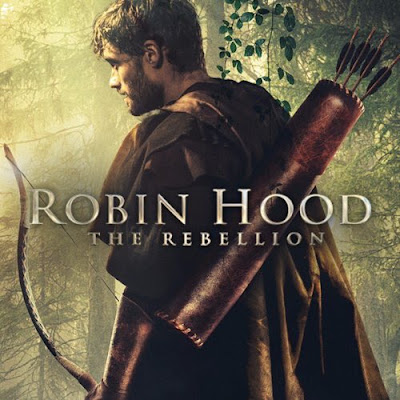 Oliver Wheatley)! Legendary Brian Blessed is Friar Tuck, James G. Nunn is Will Scarlett with James Groom as Guy of Gisborne. The movie was both directed and written by Nicholas Winter.


'THE LAST KINGDOM' SEASON 3
1ST PIC OF ALEXANDER DREYMON
Meanwhile, the first photo has been released from the set of the third season of our beloved mediaeval action adventure series THE LAST KINGDOM which is currently in production after a very long wait. It shows Alexander
Dreymon as brave Uhtred of Bebamburgh and his dear sword! The series set in the 9th century when separate kingdoms were fighting against invading Danes will also see David Dawson return as King Alfred. Netflix will air the season probably this Autumn based on Bernard Cornwell's novels.
Posted by DEZMOND at 1:30 PM