'REDBAD'
EPIC POSTERS ARE HERE!
A barbaric pleasure for you today, spylings, brand new set of rich character posters from new epic historical adventure coming to us straight from the
kingdom of Holland, with a rather exciting new trailer for their English language epic adventure REDBAD which hits domestic cinemas in Netherlands this month rich with battles and horse riding... and even swimming!  The movie is supposed to hit cinemas in some European countries from September and later on China as well, while Epic Pictures is distributing it in Northern America! The film stars Breaking Bad's Jonathan Banks, Søren Malling (as Danish king Wiglek) and Gijs Naber, and centres on the sagas and ancient legends surrounding the Frisian 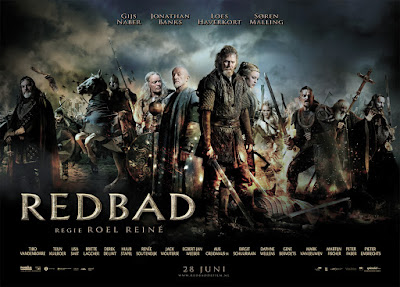 King Redbad (played by Gijs Naber) and the battle with his nemesis Pepin Herstal, Lord of the Franks, played by Jonathan Banks. The movie was
directed by Roel Reine who helmed the previous Dutch mega epic the spy has shown you before - Admiral!


THE STORY OF REDBAD
700 AD. Northern Europe is divided into two worlds: the Frisians, Saxons and Danes live above the rivers, below the rivers live the Franks. They want to achieve what even the Romans did not succeed: conquer all of Europe. They put in a new weapon to enslave the Gentiles: Christianity. They target Europe's main trading centre, where the Frisian king Aldigisl rules. Redbad, son of King Aldigsl,is doubting the outdated rituals of his people. He comes into conflict with his father when his girlfriend Fenne is appointed to be sacrificed to the gods. During the sacrificial ritual, the Franks enter the city. The Frisii lose Dorestad. Redbads Uncle Eibert seizes the power and gives
Redbad the blame of the defeat and death of his father. Tied to a raft, Redbad is pushed into the sea to die. But Redbad survives and drifts ashore, the Vikings discover him. In Denmark Redbad learns the power of his own
culture. He is slowly taken into the clan of the Vikings. He joins the Vikings after fighting against a rival clan of Svaers and marries king’s Wiglek daughter. They then return to Dorestad, where he discovers that his sister is married to the son of the Frankish king Pepijn van Herstal. During the yearly
market he sees how priest Willibrord repents his sister by using violence and swears to liberate her. He cannot do this alone, but with the army of his uncle and cousin, but even then it does not seem strong enough to beat the Franks.