'A DISCOVERY OF WITCHES'
WITCHES AND VAMPIRES IN SKY'S EPIC SHOW FIRST TRAILER
It's love and also war between vampires and witches in the television series adaptation of Deborah Harkness fantasy novel A DISCOVERY OF WITCHES which just got its first full length trailer below! British Sky will air
the series in UK this Autumn with Matthew Goode and Teresa Palmer leading the cast! She will be Diane Bishop, and he will play vampire Matthew Clairmont!  Alex Kingston and Valarie Pettiford play her aunts, Alex will be the lesbian one. A lesbian witch indeed! 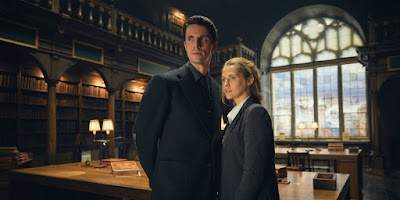 A DISCOVERY OF WITCHES
follows a science historian who also just happens to be a witch with a troubling past that has led her to suppress her magical tendencies. When her research
leads her to uncover a mysterious missing manuscript in Oxford’s Bodleian Library, she sets in motion a series of events that will lead her on an adventure across time and continents to discover the secrets of her past and the truth
about the origin of magical beings (which includes witches, vampires, and demons). Along the way, Diana also encounters and falls in love with Matthew
Clairmont, a scientist and vampire with a murky past of his own. Lindsay Duncan will play Ysabeau de Clermont, the vampire mother of Matthew Clairmont who hates all witches.