RISE OF AN EMPIRE 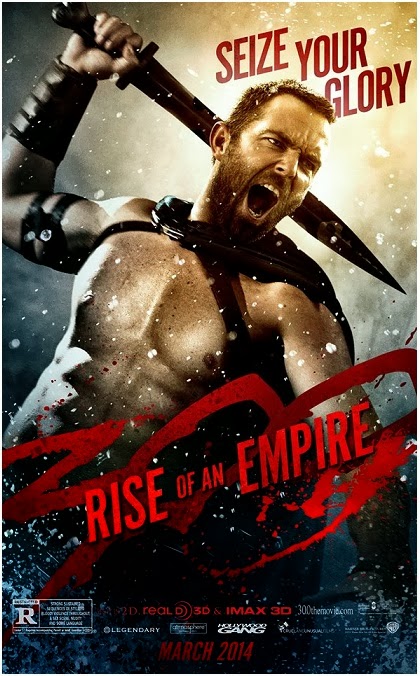 NEW HEROES SHALL RISE!
Are you ready for this year's biggest epic adventure and visually most striking historical spectacle 300 RISE OF AN EMPIRE? Today you can check out a magnificent new trailer and stunning character posters for the sequel to the huge Spartan blockbuster hitting cinemas March 7th! Back in 2006 the first movie, directed by Zack Snyder, earned almost half billion dollars worldwide and managed to revived the epic genre in cinemas and to give birth to so many popular historical shows which have been showing on the small screens in recent years with mind blowing action scenes and breathtaking visuals.

RISE OF AN EMPIRE STORY 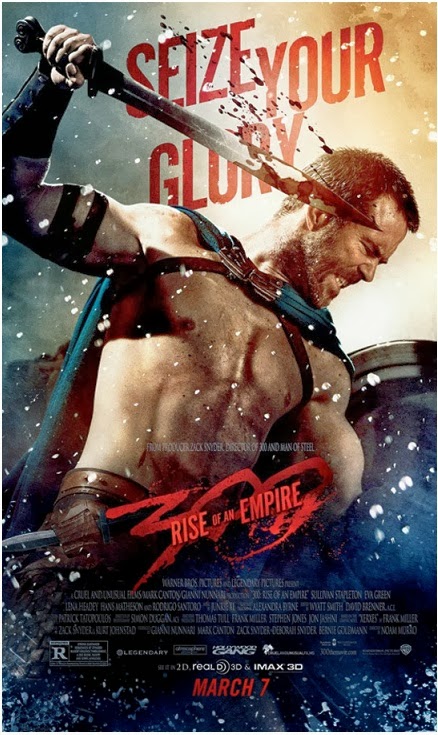 WHEN 300 FELL, A WAR FOR AN EMPIRE BEGUN
After its victory over the famous Spartan king Leonidas' 300 brave warriors who sacrificed their lives to save the country, the Persian Army under the command of infamous tyrant Xerxes (Rodrigo Santoro) marches south towards the major Greek city-states. The Democratic city of Athens, first on the path of Xerxes' army, bases its strength on its fleet, led by admiral Themistokles (Sullivan Stapleton). Themistokles is forced to an unwilling alliance with the traditional rival of Athens, oligarchic Sparta whose might lies with its 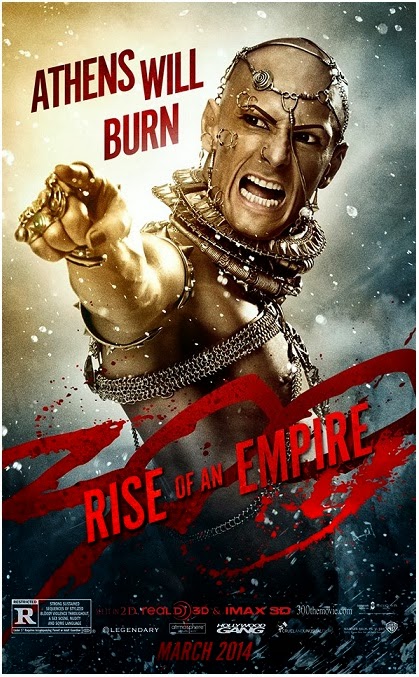 superior infantry troops. But Xerxes still reigns supreme in numbers over sea and land. Based on Frank Miller’s latest graphic novel "Xerxes", and told in the breathtaking visual style of the blockbuster “300” this new chapter of the epic saga takes the action to a fresh battlefield — on the sea — as Greek general Themistokles attempts to unite all of Greece by leading the charge that will change the course of the war. 300 RISE OF AN EMPIRE pits Themistokles against the massive invading Persian forces led by mortal-turned-god Xerxes, and Artemisia (Eva Green), vengeful commander of the Persian navy. 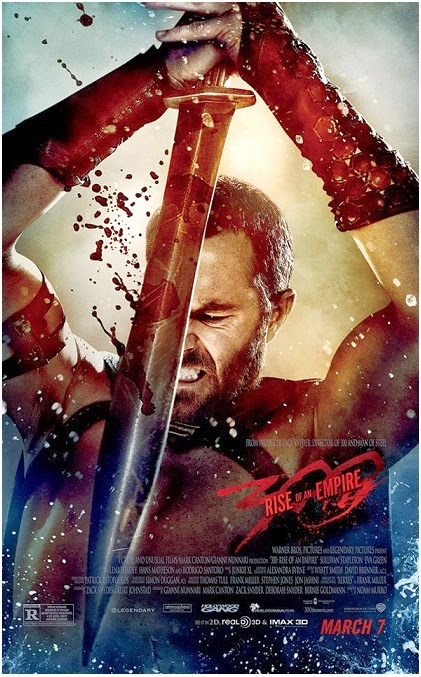 Walking the line between savvy statesman and battle hardened soldier, this Greek general has no illusions about what motivates men, kings or gods. He knows well how the game is played. A master strategist, Themistokles holds an unflinching vision for the glory of Greece and will do whatever it takes to realize that vision — whether leading the charge on the battlefield or subtly working his influence behind the scenes. Now, facing the onslaught of the massive Persian navy, he may be outnumbered but not out-maneuvered. Knowing there's more at stake here than his life and the lives of his men, he will gamble everything on a daring plan that could seal the fate of Greece and the future of democracy. 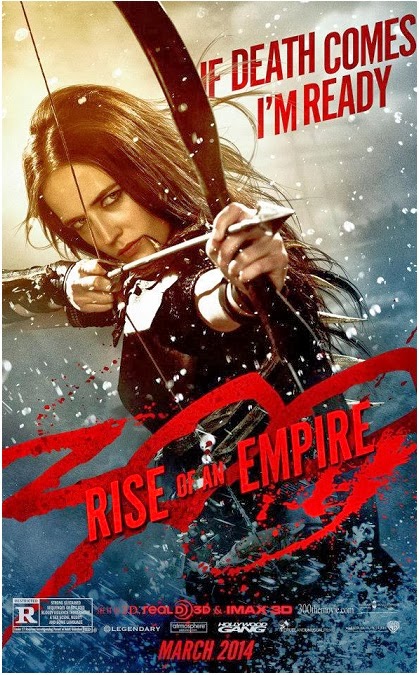 IS VENGEFUL ARTEMISIA
A woman commanding armies in a man's world, this skilled and ruthless warrior — the real power behind Xerxes' throne — knows that the rules have never applied to her. And never will. Meeting Themistokles head-on with the Persian armada, Artemisia will set the sea on fire, assaulting Greece not only for power and glory but for vengeance, the roots of which are known only to herself … and for which she is willing to sacrifice thousands and alter the fate of nations.


RISE OF AN EMPIRE CAST
LENA HEADEY IS QUEEN GORGO 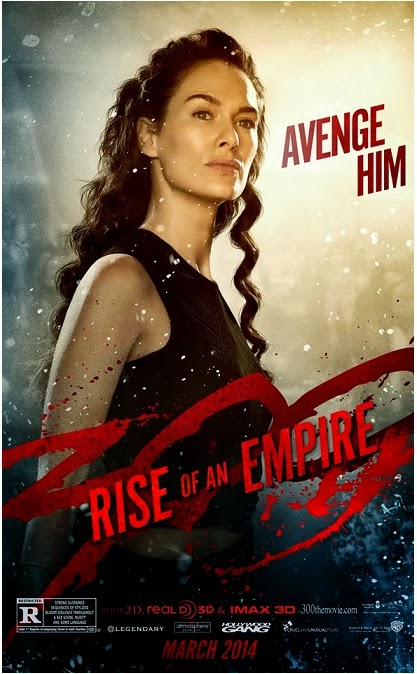 Produced and written by Zack Snyder and directed by Noam Murro the action adventure will also see Lena Headey reprising her starring role from “300” as the Spartan Queen, Gorgo, Hans Matheson (“Clash of the Titans”) stars as Aeskylos, David Wenham returns as Dilios, and Rodrigo Santoro stars again as the Persian King Xerxes. Jack O'Connell is Calisto, while Australian TV star Callan Mulvey plays Scyllias and Yigal Naor is King Darius! Absolutely brilliant costume designer Alexandra Byrne (THOR, THE AVENGERS) who won an Oscar for her stunning and deeply meticulous work in ELIZABETH THE GOLDEN AGE and was nominated for ELIZABETH and HAMLET too, is doing the costumes in the film! 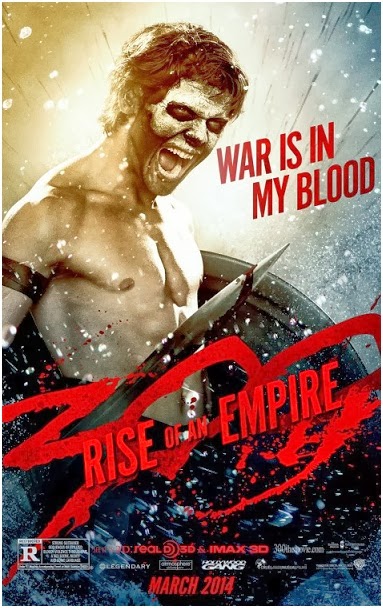 The film, shot in Bulgaria, was originally supposed to have a cameo from Gerard Butler but he refused the gig. The film was first titled XERXES and then 300 BATTLE OF ARTEMISIA and was originally focusing mostly on the Persian king but the focus was then shift onto the Greek general.  Zack Snyder was supposed to helm the film but had to drop off due to MAN OF STEEL. A special team of top fitness experts who worked on the first film was brought again to train the actors and give them all six pack abs and ripped muscles.There will, apparently, be crazy sex scenes between Sullivan and Eva in the film!
Posted by DEZMOND at 6:15 PM