WAITING FOR BOJANGLES
TRAILER WITH VIRGINIE EFIRA
A few days ago I showed you a trailer for Other People's Children which will premiere at Vennice with our goddess Virginie Efira, and today I have another one with her for you: a trailer for WAITING FOR BOJANGLES movie drama which arrives to USA this September also starring Romain Duris. It already aired in Russia, France and Spain and will hit Germany this week. In front of their little boy, Camille and Georges dance on their favorite song "Mr Bojangles". With them, there is only place for fun and fantasy. The one who shows the way is the mother, an unpredictable wisp. She leads them into a whirlwind of poetry so that the party continues again and again, no matter what happens. Mad love has never lived up to its

name so well. But as his mesmerizing and unpredictable mother descends deeper into her own mind, it is up to Gary and his father, Georges, to keep her safe.
PLUS: REVOIR PARIS MOVIE
Virginie Efira, who shot 9 films in last two years, also has REVOIR PARIS arriving this September. Three months after surviving a terrorist attack in a 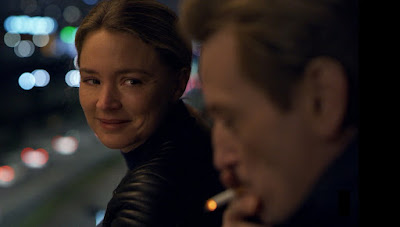 bistro, Mia is still traumatized and unable to recall the events of that night. In an effort to move forward, she investigates her memories and retraces her steps. Benoit Magimel also stars.
Posted by DEZMOND at 7:00 PM