RISE OF THE WITCHES
SAUDI EPIC TV SERIES
Well, twas a long time we had anything from Arabia here, so let us correct that with first photos from new Saudi epic TV series RISE OF THE WITCHES their most ambitious and expensive show ever from MBC Studios. Based on the best-selling Saudi mythology books by Osamah 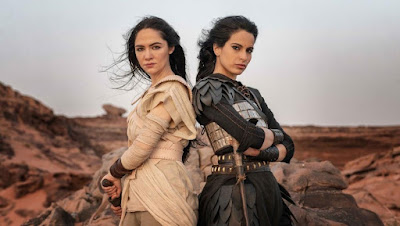 Almuslim, the series, set in ancient Arabia, tells the story of an epic war between two rival witch covens, led by Afsaar and Da’ja’a. Growing up in a world dominated by male magicians who want to prevent women from having 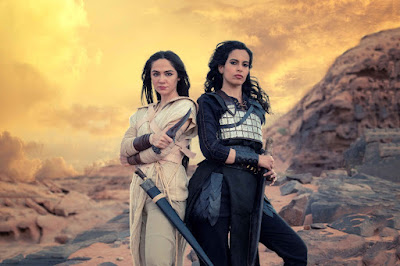 any access to magical powers (so kinda the opposite of misandrist Wheel of Time), both witches secretly learn the arts and go on to form their own groups in order to protect themselves and gain power. Ida AlKusay and Sumaya Rida. lead the ten part saga which will stream on pan Arabic streamer Shahid.
THE AWOKEN DYSTOPIA
TO BECOME A TV SERIES
Speaking of fantasy, Keshet Studios has bought TV series rights on Katelyn Monroe Howes' dystopian novel THE AWOKEN which is out this week at Penguin Random House. When Alabine Rivers, a politically active young woman with a bright career and romance ahead of her, discovers she has terminal cancer, the only thing that gives her solace is the possibility of a second life through the emerging field of cryogenics. A century later, scientists have discovered how to bring the cryogenically frozen back to life, but humanity is locked in a philosophical battle over the ethics of this new God-like power, a battle that has turned violent: those who are resurrected, the Awoken, have been declared illegal and are to be shot on sight. Which means here very life is now a crime!
STARZ' DANGEROUS LIAISONS
AIR DATE AND TRAILER
Meanwhile, Starz has unveiled today the first teaser and air date for their eight part TV series version of DANGEROUS LIAISONS which will arrive November 6th starring Alice Englert, Nicholas Denton, Lesley Manville, and Tom Wlaschiha. The series is a bold prelude of Laclos’ classic 18th century novel focusing on the origin story of how his iconic characters, the Marquise de Merteuil and the Vicomte de Valmont, met as passionate young lovers in Paris on the eve of the revolution. This modern take on a classic story takes audiences through wonder and terror, beauty and degradation, seduction and deception in pre-revolutionary Paris. Driven to right the wrongs of their past, the young couple’s survival depends on their skills of seduction and manipulation of not only the French nobility but of each other. Alice Englert 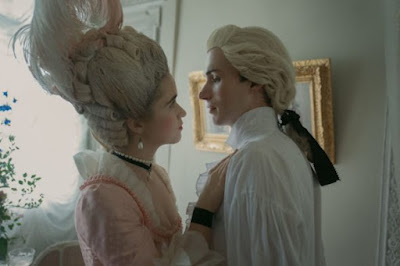 and Nicholas Denton portray the notorious lovers: Camille who is taken in by the current Marquise de Merteuil (Lesley Manville) navigates her own path in a world of men, using the power of secrets to take back control, and 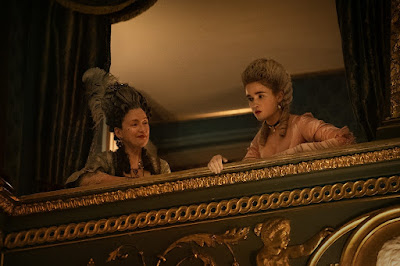 Valmont who will stop at nothing to regain his title that was recently taken from him. Their on- again off-again love story is the heart of the series. It’s not love… it’s war. I must admit those two youngsters look terribly dull and miscast to me, no passion nor talent in them.
Posted by DEZMOND at 7:30 PM