JASON ISAACS TO LEAD
CARY GRANT TV SERIES
ITV and Britbox have announced work on four part mini TV series on famous Cary Grant with Jason Isaacs in the lead role. ARCHIE (his real name was Archibald) will start with his birth in Bristol in 1904 and tell the story of a childhood spent in extreme poverty, dealing with his father’s adultery and the loss of older brother John. At 14, he joined music hall act the 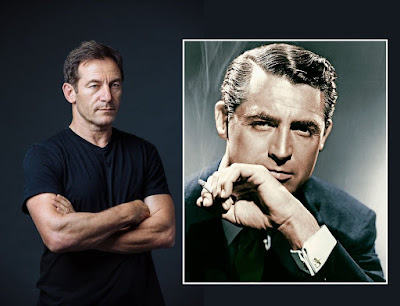 Bob Pender Troupe and moved to the U.S. and, soon after, Cary Grant was born. The show will intercut scenes from 1961 when, at the height of his fame, Grant was desperately unhappy in his private life after two failed marriages. Grant then began wooing TV star Dyan Cannon, who was 30 years his junior and didn’t immediately fall for his charms. He married her in 1965 and retired from film acting one year later. The series will first stream on ITVX.
MARIE ANTOINETTE SERIES
LOUIS CUNNINGHAM IS HIS ROYAL HIGHNESS LOUIS XVI
As one of our spylings said we have a Fall of Queens ahead of us with lots of new shows about queens and empresses, including MARIE ANTOINETTE which should hit BBC 2 in November, Canal Plus in France probably in October and will also air on BBC One in Australia. The fun fact for today is that Louis Cunningham who will play Marie's husband King Louis XVI is in real life a grandson of prince Charles of Luxembourg! As Daily Mail writes, eight episode saga will follow incredibly modern and avant-garde young queen who was barely 14 years old when she left Austria to marry the Dauphin of France. Free, independent and feminist ahead of her time, the fearless queen will be played by Emilia Schüle. Beside her and Cunningham, who also starred in Bridgerton, the cast will also have James Purefoy, Marthe Keller and Gaia Weiss as Madame du Barry.
Posted by DEZMOND at 7:00 PM