EAST OF EDEN SERIES
EYEING FLORENCE PUGH
It is still in very early stages of production, but rumour has it that Netflix is turning EAST OF EDEN novel from John Steinbeck into a mini series to be directedby Zoe Kazan whose grandad Elia directed the original movie adaptation. Florence Pugh is apparently attached to star in the story set in California’s Salinas Valley over a period that stretches from the Civil War to the end of World War I. As Variety reports, the epic novel tells the interconnected stories of the Hamilton family, an Irish immigrant family with nine children, and the Trask family, lead by the wealthy Adam Trask. The story eventually narrows 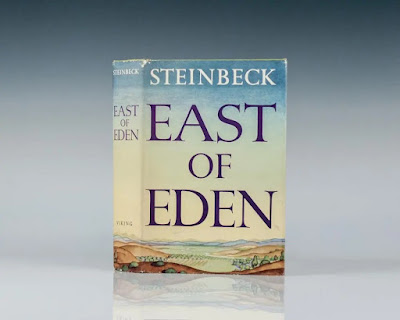 its focus to center around the Trask family and the drama surrounding Adam, his wife Cathy and their sons Cal and Aron. Back in the 80s there was also a TV adaptation with Jane Seymour while the four time Oscar nominated movie version had James Dean as the lead.
HOUSE OF THE DRAGON
GETS A BRAND NEW POSTER
While we are waiting for the August 21st premiere over at HBO Max, HOUSE OF THE DRAGON epic series has just got a brand new poster. Promoting the series based on George R.R. Martin's Game of Thrones books, the new poster features Emma D’Arcy as Princess Rhaenyra Targaryen. The story of the series itself is set 200 years before the events of Game of Thrones and chronicles the early days of House Targaryen. The cast also features Paddy Consi- dine, Matt Smith, Olivia Cooke, Ryan Corr, Graham McTavish, Steve Toussaint, Eve Best, Fabien Frankel, Sonoya Mizuno, and Rhys Ifans. Check out the trailer below released last month!
Posted by DEZMOND at 11:00 AM

This one sounds very promising!

Hope they do not ruin the rest of the cast.

I pray East of Eden remains a project, unless they change the lead I’m not watching it. I loved the James Dean version, adored the Jane Seymour miniseries, cannot imagine Pugh playing this sensual evil temptress. I find her ugly, annoying and a poor actress to boot. But they keep on shoving her into good projects that do not benefit from her presence.

I don't get the buzz around her either, but then again so many talentless people are pushed into the spotlights these days, from Kristen Stewart and Saoirse Ronan, to Pugh, Chalamet, Coleman, Oscar Isaacs, and Adam Driver, to name just a few of them. Poo got the role of princess Irulan in Dune sequel recently but she kinda fits that horrid cast of mediocre actors from the first movie.

With the exception of Saoirse, I find all the others as bad as RePughnant. bEsides, they are all stupid. I almost puke everytime I hear an interview with Timothee.

I cannot stand Saoirse, she was terrible in everything I saw her in, always performs like she is in a high school drama play, not serious acting just poor efforts of it. She single handedly ruined Mary Queen of Scots, which would have been fully awful if Margot Robbie wasn't so surprisingly well as Elizabeth. I also remember how excruciatingly terrible Saoirse was in Chesil Beach. What a horrid little movie that was.

I liked Saoirse since she was little. I loved her in a Long Way Home, Atonement and Hannah. I haven’t been a fan of her adult work despite all the hype, but I blamed the films. With the exception of Brooklyn where both film and her were superb, she’s been in poorly made projects. I hated Mary, Queen of Scots, but I thought she was the best among all those idiots, and she was the only saving grace in Little Women.

The best in MaryQueen of Scots??? Whaaaat? With that pathetic face of hers and annoying voice and no emotional range? Jack Lowden was so wasted for nothing in it.

I said she was the best, not that she was good. The directing was awful, it helped make her so distasteful, and having bad actors surrounding you is detrimental to your own thespian abilities.

How can she be best beside Lowden and Margot? Not to mention other older members of the cast. But the whole film was one of the worst experiences of my life.

Maybe he should work on finishing the last book in the GOT series before approving new series based on his work. The poster is interesting though!

He has about ten spin offs working on.