FISHERMAN'S FRIENDS: ONE AND ALL SEQUEL MOVIE TRAILER IS HERE WITH JAMES PUREFOY! APPLE TV TURNING EDITH WHARTON'S THE BUCCANNEERS INTO A 19TH CENTURY COSTUME DRAMA

THE BUCCANEERS PERIOD
SET SERIES AT APPLE TV+
If you asked me what is the one thing I'd never ever in million years want it is probably a bunch of silly American girls thrown into a posh European costume drama, but it seems Apple TV + is set to give us just that turning the nightmare into reality: they've given an order for an eight episode series based on Edith Wharton's unfinished novel THE BUCCANEERS and they've gone as far as to cast Kristine Froseth, Alisha Boe,  the godawful Josie Totah, Aubri Ibrag, Imogen Waterhouse and Mia Threapleton in the title roles.
Girls with money, men with power. New money, old secrets. A group of fun loving young American girls explode into the tightly corseted London season of the 1870s, kicking off an Anglo-American culture clash as the land of the stiff upper lip is infiltrated by a refreshing disregard for centuries of tradition. Sent to secure husbands and titles, the buccaneers’ hearts are set on much more than that, and saying ‘I do’ is just the beginning. Created by Katherine Jakeways, the series is already shooting over in Scotland. The book was already turned into a series back in 2006 starring Carla Gugino, Cherie Lunghi and Mira Sorvino.
FISHERMAN'S FRIENDS
ONE AND ALL SEQUEL TRAILER
Although the first one wasn't anything to write home about, warm comedy drama FISHERMAN'S FRIENDS has got a ONE AND ALL sequel which is ready to sing its way into cinemas August 19th with James Purefoy again taking the lead role from the 2019 unexpected cinematic hit about a music loving band of fishermen who suddenly score a UK charts hit with their sailor tunes. We rejoin the world's oldest 'buoy band' a year later struggling to navigate the pressures, pitfalls and temptations of their newfound fame. The sequel follows the celebrated shanty singers through the highs and lows as life-long friendships are put to 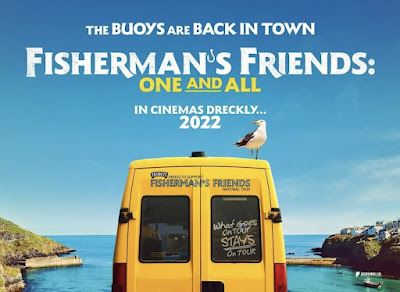 the test and they battle the dreaded 'curse of the second album'. Follow the true story of the band's next real-life adventure, performing at the 2011 Glastonbury Festival alongside the likes of Beyoncé.
Posted by DEZMOND at 11:00 AM