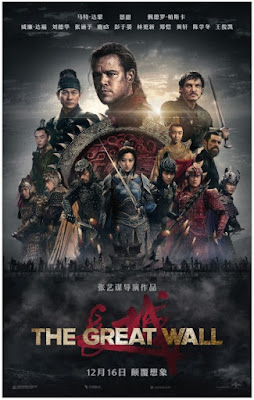 Not much to report today, just some new posters for the movies we're waiting to see in the cinemas, starting with a new one for epic historical fantasy adventure THE GREAT WALL which starts rolling around the world from December till February next year.
Starring Andy Lau, Willem Dafoe, Pedro Pascal and greatly miscast Matt Damon and directed by legendary visual genius Yimou Zhang (as his first English movie), it follows an elite mediaeval force which, in the battle for humanity, makes a heroic stand atop the Great Wall of China to combat an army of monsters. 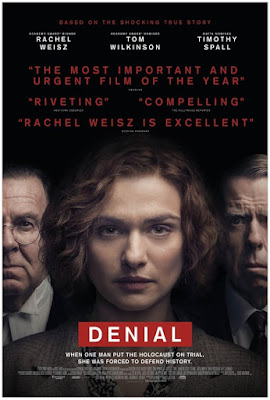 A new poster has also been released for another period set movie, Rachel Weisz starring DENIAL  based on the acclaimed book "History on Trial: My Day in Court with a Holocaust Denier"! It recounts Deborah E. Lipstadt's (Rachel Weisz) legal battle for historical truth against David Irving (Timothy Spall), who accused her of libel when she declared him a Holocaust denier. In the English legal system, the burden of proof is on the accused, therefore it was up to Lipstadt and her legal team to prove the essential truth that the Holocaust occurred. Tom Wilkinson also stars with Jack Lowden and Andrew Scott in the movie which is out in USA and will open in UK in January.
Posted by DEZMOND at 7:54 PM