SHORT TV HEADLINES
ALL CREATURES GREAT AND SMALL THIRD SEASON
Short TV updates for you today, starting with news from PBS who have announced that ALL CREATURES GREAT AND SMALL series will return with the third season January 8th following everybody's favourite country vet, played by Nicholas Ralph, in six new episodes plus a Christmas one. In Europe, third season will probably arrive before that, in September. All of the cast returns for the new season. In the third season the cantankerous Siegfried (Simon West) will navigate his relationship with younger brother and blossoming vet Tristan (Callum Woodhouse), and will also have to confront his own past with World War I coming back to haunt him. Meanwhile, Mrs. Hall (Anna Madeley) and Helen (Rachel Shenton) have similar challenges in this season, with Helen 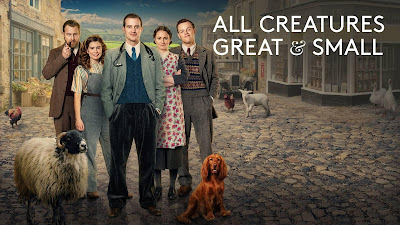 trying to balance being a wife and leaving behind a previous life and having to navigate what that’s like, and Mrs. Hall figuring out if there’s a life outside Skeldale House. The spread of tuberculosis also plays a major role in Season 3 and James must learn how to go about those procedures.
MISS SCARLET AND THE DUKE
Although PBS is yet to air the second season from October 16th after already airing in UK last month, MISS SCARLET AND THE DUKE will launch the third season too from January 8th on PBS for the audience in USA. This means the third season of the series which follows Britain's first 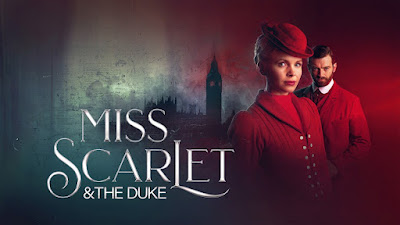 female detective will arrive to Europe sometime this Autumn ahead of the US premiere. On Sunday October 16th, PBS Masterpiece will also start Lesley Manville's Magpie Murders which already streamed in Europe on Britbox.
WARRIOR SEASON THREE
Meanwhile, after a two year break, the third season of WARRIOR series has begun shooting for HBO Max where it had moved from Cinemax. The series takes place during the brutal Tong Wars of San Francisco’s Chinatown in the late 19th century.  Andrew Koji returns as Ah Sahm, Olivia Cheng as Ah Toy, Jason Tobin as Young Jun, Dianne Doan as Mai Ling, Kieran Bew as Bill O’Hara, Dean Jagger as Dylan Leary, Tom Weston Jones as Richard Lee, Hoon Lee as Wang Chao, Joe Taslim as Li Yong, Langley Kirkwood as Walter Buckley, Perry Yung as Father Jun, with new additions in Mark Dacascos as Kong Pak, the former leader of a newly absorbed, Long Zii-affiliated tong and Li Yong’s old friend and mentor, and Chelsea Muirhead as Yan Mi, the unassuming but shrewd daughter of a local print shop maker based in Chinatown. The ten episode third season will arrive next year, hopefully.
Posted by DEZMOND at 7:30 PM

Labels: ALL CREATURES GREAT AND SMALL, MISS SCARLET AND THE DUKE, WARRIOR