CHRIS EVANS JOINS
EMILY BLUNT IN PAIN HUSTLERS
Well that will be the hottest pair up ever: Chris Evans is in negotiations to join Emily Blunt's PAIN HUSTLERS movie at Netflix. She plays Liza Drake, a high-school dropout dreaming of a better life for her and her young 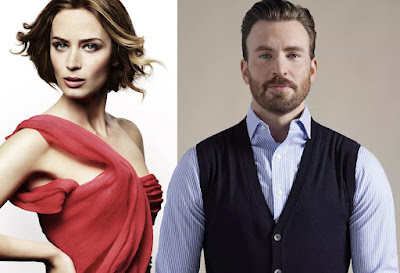 daughter. Liz lands a job with a failing pharmaceutical startup in a yellowing strip mall in Central Florida. Her charm, guts and drive catapult the company and her into the high life, where she soon finds herself at the center of a criminal conspiracy with deadly consequences.
THE LIONS OF SICILY
FOR DISNEY PLUS ITALIA
We are usually used to getting Italian originals from Sky and Netflix, but now Disney Plus Italia has also announced an original new series and it will be in our favourite historical genre. The production has already commenced on THE LIONS OF SICILY, a family saga based on Stefania Auci’s bestseller “The Florios of Sicily.” Paolo Genovese is directing this saga which will have eight episodes set between 1800 and 1861, with the story following the Florio family where brothers Paolo and Ignazio are two small spice merchants who have escaped from a Calabria stuck in the past and in search of social redemption. In Sicily they invent a future, turning a small, run-down shop into a flourish business activity that young Vincenzo, with his revolutionary ideas, will transform into an economic empire. However, overwhelming Vincenzo’s life and that of the entire family is the disruptive arrival of Giulia, a strong and intelligent woman who is in contrast with the rigid rules of the society of the time. Michele Riondino, Miriam Leone, Donatella Finocchiaro, Vinicio Marchioni, Eduardo Scarpetta, Paolo Briguglia, Ester Pantano and Adele Cammarata, are all members of the cast.
LUCK MOVIE TRAILER
APPLE'S ANIMATED COMEDY
Apple TV Plus has released first trailer for their animated comedy movie LUCK which will hit the streamer August 5th telling the story of Sam Greenfield, the unluckiest person in the world, who when she stumbles into the never-before-seen Land of Luck, sets out on a quest to bring some good luck home for her best friend. But with humans not allowed, her only chance is teaming up with the magical creatures who live there to do it. Peggy Holmes directed the movie. The voice cast has some not so likeable people in it including Jane Fonda, Whoopi Goldberg, Simon Pegg,  beside Flula Borg, Lil Rel Howery, Colin O’Donoghue, John Ratzenberger and Adelynn Spoon Check out the trailer below and tell us what you think? Will you be watching?
Posted by DEZMOND at 7:00 PM