QUEEN OF FIRE
NEW EPIC TV SERIES
It is unusual for an adaptation to have different protagonist than the book, but this is exactly what will happen in QUEEN OF FIRE epic TV series which The Whole Spiel and Lone Wolf Pictures will make out of Anthony Ryan's famous epic sagas Raven's Shadow and Raven's Blade which have five books in total sold in more than million copies with your trusted spy as one of the European translators. The series will be based on characters, stories and legends from these books with Stephen McDonogh, Paul Telegdy and Ryan himself executive producing!
QUEEN OF FIRE will follow princess Lyrna who, despite the malign manipulations of her father, rises to lead an empire in uncovering the truth of the forbidden powers of the Dark; Reva, a young woman, born to privilege, stolen from her loving home, raised to kill and blinded by revenge; and ‘The Woman,’ as she is simply known, a cruel, ruthless and utterly unrepentant soul in the body of a beautiful woman with an insatiable lust for power who will stop at nothing for the promise of immortality. The series will also features the lead hero from the books - Vaelin, a legendary warrior, server of the faith, possessor of a gift, known as ‘the Blood Song,’ a form of precognition, guiding his sword in battle 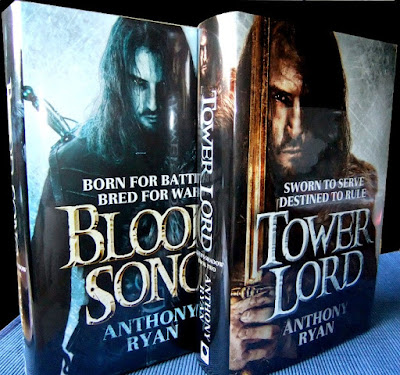 and showing him the right path. Non-stop action, with heretics challenging the monastic orders of faith, legendary characters and monstrous creatures in an extraordinary struggle for power spanning a world of empires, are part of the story of people and empires bitterly divided, and the vital necessity of overcoming their differences to have any hope of making a better world.
Posted by DEZMOND at 7:00 PM