STUNNING 1ST PHOTOS REVEAL HENRY CAVILL AND HIS TEAM IN NETFLIX EPIC SAGA WITCHER! THE TRAILER FOR THE FINAL SEASON OF BBC 18TH CENTURY SAGA POLDARK IS HERE WITH AIDAN TURNER! PLUS THE FIRST PHOTOS!

'THE WITCHER' EPIC SERIES
HENRY CAVILL IS DEMON HUNTER
Quite unusually for a Boring Monday, two major epic delights for you today: one from BBC other from Netflix! World's most popular streaming service has just released stunning first photos from their new epic fantasy TV series THE WITCHER depicting the most dashing Henry Cavill as the title hero and other two characters that will follow him on his adventures. It is also possible that we will get the first long awaited trailer later this month as the show will appear on San Diego Comic Con this July! It is one of the most anticipated new shows, which could gain worldwide fame when it hits the small screens.

THE WITCHER TV SERIES
based on the best selling fantasy series of books, from Polish author Andrzej Sapkowski  is an epic tale of fate and family. Geralt of Rivia, a solitary
monster hunter, struggles to find his place in The Continent, a world invaded by demons where people often prove more wicked than beasts. But when
destiny hurtles him toward a powerful sorceress, and a young princess with a dangerous secret, the three must learn to navigate the increasingly volatile
Continent together. Henry Cavill takes the lead role of Geralt, Anya Cholatra is sorceress Yennefer and Freya Allan is mysterious young girl Ciri in the eight episode series. 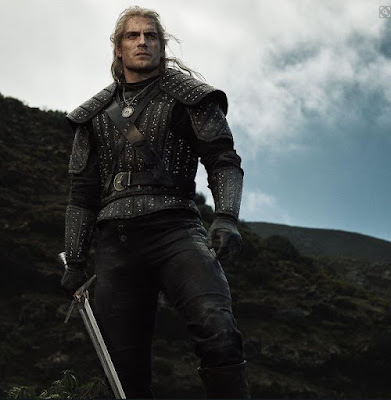 'POLDARK' SEASON 5
FAREWELL TO CORNWALL!
It is official, people, we will have the great summer battle between ITV's Beecham House and BBC's POLDARK which returns with the final fifth season Sunday July 14th and you can check out the first trailer below! The series will air later this year at PBS too for American audience. This will be
the first season not to directly follow the stories of Winston Graham's novels and will again follow Aidan Turner as the mine owner and a politician at the  beginning of the 1800s, instead of jumping a decade and focusing on his children like in the novels. Vincent Regan joins the series as Poldark's old army friend Colonel Ned Despard, the governor of British
Honduras who ended up in prison for giving the land away to slaves. It will be Ross' mission to get him out. Meanwhile, doctor Dwight Enys (Luke Norris) will be treating George Warleggan (Jack Farthing) from the trauma after the loss of his wife. The slogan of the final season is - If your country betrays you, to whom do you then owe loyalty?
Posted by DEZMOND at 1:30 PM