He already played her father a few years ago in Testament of Youth War World I movie, and now he will do it again: Dominic West has been cast to play Alicia Vikander's dad in Lara Croft TOMB RAIDER reboot movie! The story itself will see her searching for her long last father Lord Richard Croft! As 'The Hollywood Reporter' writes, the movie will have Lara Croft beginning her first adventure in order to finish her father's research and uncover ancient secrets in order to clear his disgraced name. In the video game, her father is a rich archaeologist! Into The Badlands star Daniel Wu will play Lu Ren, a ship captain who helps Lara Croft throughout her journey to find her father. The movie is set for March next year. 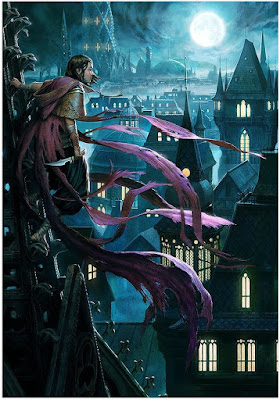 Cosmere fantasy world into a TV series and films, and now it has been revealed that one of the films from that universe will be MISTBORN: THE FINAL EMPIRE to be adapted by F Scott Frazier. The first in the fantasy trilogy has the story set in a medieval dystopian future on the world Scadrial, where supernatural mists cloud every night. Central to the series universe is the presence of magic. A street urchin with a hidden, yet powerful gift, joins the leader of a reckless den of thieves to fight a merciless immortal force as the last hope to bring peace back to The Final Empire.