Today I have some Marvel updates for you: the new casting solutions for "X-Men: First Class" and "Captain America: the First Avenger". As you know one of our favourite British talents Michael Fassbender has been signed in officially for the role of young Magneto in "X-Men: First Class" and thus the rumors we've talked about for a month have been confirmed, but now he has a new colleague in the movie, beside James McAvoy who will portray Professor Xavier: blond beauty Alice Eve ("She's Out of My League") will portray Emma Frost, aka the White Queen, in the new installment of the mutant saga. 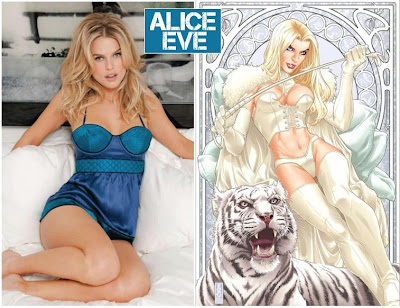 Rosamund Pike will play Moira McTaggert, the assistant to Professor X, while Benjamin Walker will appear as a young Henry McCoy, or The Beast.
On the other front, the rumors about Tommy Lee Jones playing Colonel Phillips in "Captain America: The First Avenger" have also been confirmed and he will portray the man who will recruit Chris Evans to join the secret experiment that will make Captain America out of him.
Posted by DEZMOND at 2:47 PM