Two irresistible visual treats for you today. First we have a cool new poster for the upcoming Roman epic "Centurion" coming out this August with the ultra talented 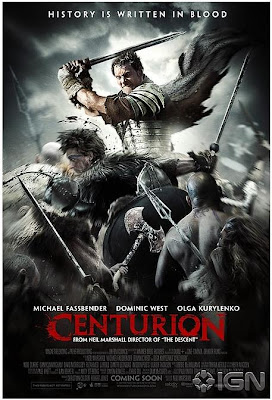 Michael Fassbender, Dominic West and Olga Kurylenko. "Centurion" is set in the Roman Empire which is faced with an elusive enemy: the savage and terrifying tribes known as the Picts. Quintus, sole survivor of a Pictish raid on a Roman frontier fort, marches north with General Virilus' legendary Ninth Legion, under orders to wipe the Picts from the face of the earth and destroy their leader Gorlacon. But when the legion is ambushed on unfamiliar ground, and Virilus taken captive, Quintus faces a desperate struggle to keep his small platoon alive behind enemy lines, evading remorseless Pict pursuers over harsh terrain, as the band of soldiers race to rescue their General, and to reach the safety of the Roman frontier. 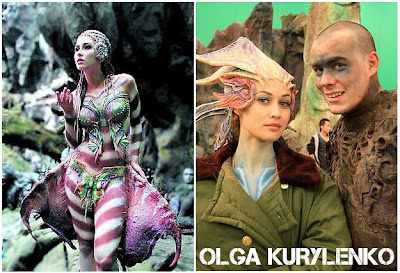 Another huge treat are the first pics of Olga Kurylenko as the mermaid empress in the mesmerizing Chinese 3D underwater epic "Empires of the Deep". The most expensive Asian epic tells about a young man's adventure in the undersea mermaid kingdom in order to save his father, while encountering ferocious sea monsters and gets involved in large-scale battles in the seabed between mermaids, monsters and demons.
Posted by DEZMOND at 3:11 PM