Check out the first preview clip in which director Neil Jordan ("Crying Game", "Interview with a Vampire"), producer Michael Hirst ("The Tudors", "Elizabeth the Golden Age") 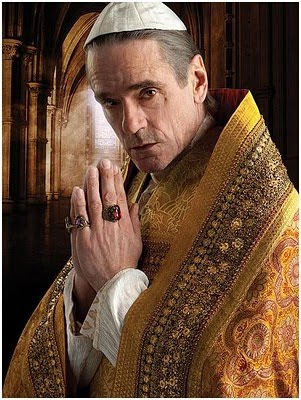 and actor Jeremy Irons talk about the most anticipated show "The Borgias" which is coming to Showtime in 2011. "The Borgias" will be a complex, scandalous, edgy, unvarnished portrait of one of history’s most intriguing and infamous dynastic families whose power and influence eventually lead them to their demise. Their motto was "politics have no relation to morals". Jeremy Irons will portray pope Rodrigo Borgia, the cunning, manipulative patriarch of the Borgia family, Colm Feore will play his arch enemy Cardinal Giuliano Della Rovere, while François Arnaud will play Cesare Borgia, Rodrigo's Machiavellian son. The roles of Juan and Lucretia Borgias are yet to be cast.