THE PRINCESS OF KAPURTHALA
EPIC MOVIE IN PRODUCTION!
As Variety reports, director and scriptwriter Michael Radford is preparing THE PRINCESS OF KAPURTHALA (La Princesa De Kapurthala) epic movie together with Manuel Estudillo. Based on the books “The Princess of Kapurthala” and “The Dream of the Maharani” by Elisa Vaszquez de Gey,  it will be a trilogy following the true life story of Spanish girl Anita Delgado, who became the Maharani Prem Kaur of Kapurthala in India at the age of 16. Not just a pretty face that the Maharajah falls in love with, Anita is also a strong and determined woman who learns everything needed to become a princess, and later uses these charms to leave her mark on the society of that time! Besides the love story, the film will trace the Princess’s popularity. She appeared on newspaper and magazine covers and was deeply involved with social causes. She helped soldiers fighting in World War I, travelled to the war front in France and built hospitals there. She also 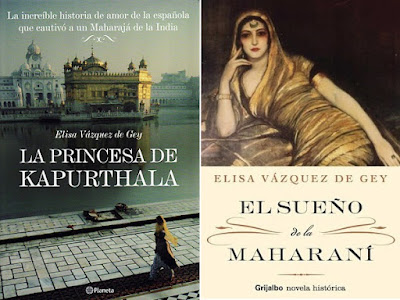 tried to stop the marriages of underage Indian girls and created a fund to support widows, among others. The production should start early next year both in Spain and in India.
Posted by DEZMOND at 2:18 PM