PETER I: THE LAST TZAR
& THE FIRST EMPEROR TRAILER
Another massive project currently in Russian cinemas is a mix of a documentary movie and historical live action epic PETER I: THE LAST TZAR AND THE FIRST EMPEROR (Петр I: Последний царь и первый император) which is out in their cinemas since November 3rd! The figure of Emperor Peter the Great (Aleksei Lukin), as well as the era of his formation and reign, still excites the minds of people all over the world. The creators answer questions about how to take the throne when you are the fourteenth child in the family; how to win access to the sea when there is no professional army and navy in the country; how, in a few decades, to bring to the world leaders a country that no one had considered before, and many others. Andrei Kravchuk directed this epic movie.
HUDOZHNIK TV SERIES
THE ARTIST IN CRIME
Since our From Russia With Love weekend brought us a massive increase in visitors, I figured we could stay one more day in Russia as I have THE ARTIST (Hudozhnik) series to present to you. The sixteen episode historical series, which already started airing back in September on Russia 1 national broadcaster, stars Andrey Smolyakov, Aleksandr Gorbatov, our dear Catherine the Great Marina Aleksa- ndrova, and our sweet boo Kirill Zaytsev (be still our hearts).
MARCH 1944
At the front, the Red Army is conducting a confident offensive. The Allies are about to open a second front, and it seems that the final defeat of Nazi Germany is very close. However, the joy of the coming victory is overshadowed by a series of daring and brutal murders. No one has ever managed to see the bandits up close. According to the scanty testimonies of 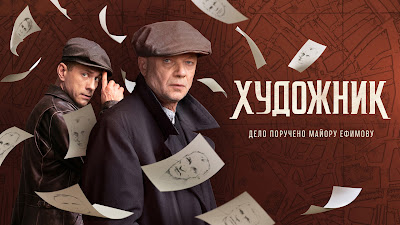 random eyewitnesses, the composition of the attackers is constantly changing. And every time at the crime scene they leave portraits of the dead. For these drawings and cruelty, the gang was nicknamed "Dead Head", and its leader - the Artist.
Posted by DEZMOND at 7:58 PM