THE WHALE TRAILER
STARRING BRENDAN FRASER
Ever since it premiered at Venice Film Festival movie drama THE WHALE has been gathering Oscar buzz for Brendan Fraser's outstanding role in it for which he keeps getting standing ovations and now we finally get to see it in the first trailer for the film which hits cinemas December 9th!  Based on the play by Samuel D. Hunter, THE WHALE sees Brendan Fraser in the lead role in Darren Aronofsky directed film as Charlie, a 600-pound reclusive middle-aged English teacher who tries to reconnect with his 17-year-old daughter. The two have grown apart after Charlie abandoned his family for his gay lover, who later died, which led to Charlie binge-eating out of pain and guilt.
SPOILER ALERT TRAILER
STARRING BEN ALDRIDGE
Speaking of private life battles, there is one also in heart wrecking drama trailer for SPOILER ALERT movie from Michael Showalter which arrives into cinemas also December 9th starring our dear Ben Aldridge together with Jim Parsons and always awful Sally Field. Love never stops surprising you even when you know how it ends - is the logo of this movie which sees Ben and Jim playing a gay couple Michael Ausiello and Kit Cowan, whose relationship sadly takes a tragic turn when Cowan is diagnosed with terminal cancer. The film is based on the auto-biographical novel by Michael Ausiello of his love story with Kit Cowan, 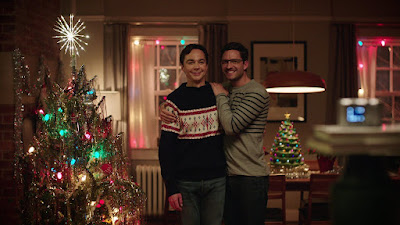 jumping back and forth non-chronologically through their courtship, relationship issues and Kit's cancer. See the moving trailer below:
Posted by DEZMOND at 7:40 PM