LEONARDO TV SERIES
ARRIVES THIS SPRING
The word around the web is that this one has already been renewed for the second season which is, allegedly, already in production, which means we will be enjoying it next year as well (together with the seconds seasons of El Cid and Shadow and Bone and the third of Discovery of Witches). LEONARDO will be the first epic TV series of spring 2021 hitting the small screens in Italy next week, March 23rd with two episodes airing each Tuesday next four weeks on RAI. Italians, for some reason, like to air it like that. This eight part saga will also arrive to Amazon Prime on April 16th! Viewers will learn how the 15th and 16th century master painter grew into an unparalleled genius whose work overturned the established order. His restless curiosity flitted between arts, science and technology, driven by a profound quest for knowledge and determined to unfold the mysteries of the world around him. The series attempts to unlock the enigma of this extraordinary man, through an untold story of mystery and passion. I cannot say I'm overly excited about this one, Aidan Turner is both physically and as an actor always the same playing always himself (and he already played a famous painter in Desperate Romantics) and the sets and the costumes look like they were taken from Medici series whose producer Frank Spotnitz is also doing this one, but I will certainly give it a go. 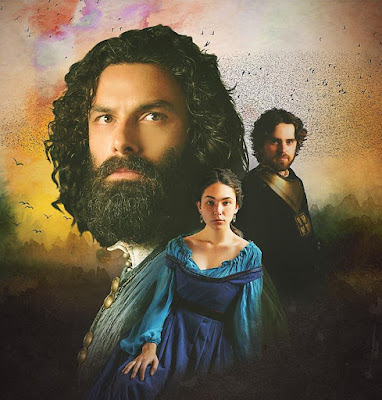 THIS EIGHT PART TV SERIES
will tell the incredible true story of the definitive ‘Renaissance man’. Born the illegitimate son of a notary in the rural town of Vinci, Leonardo’s lonely childhood leaves him with a relentless, near superhuman drive to understand everything. Under questioning by a Milanese investigator (Freddie Highmore) who holds Leonardo’s life in his hands, we come to see the terrible personal sacrifice that led him to create masterpieces that changed the way we see the world forever. The series will portray him as a gay outsider who used his work as a way of hiding his true self. Each episode will examine one of da Vinci’s artworks for hidden clues about a tortured artist struggling for perfection. Freddie Highmore, who is also producing, will play Stefano Giraldi, a fictional police detective who frames the narrative, investigating da Vinci as the suspect in a murder case and digging into his past.
IN THE LEONARDO CAST
together with Aidan Turner who plays Leonardo Da Vinci, Giancarlo Giannini is Andrea del Verrocchio, Leonardo’s teacher; Matilda De Angelis is Caterina da Cremona, the mysterious muse and closest friend; Freddie Highmore is Stefano Giraldi, a young investigator of the Podestà charged with solving the mystery at the center of the story. After watching the show, the spy can tell you that Freddie is almost atrociously bad in his role which he obviously gave to himself as a producer, the utter lack of talent,
shockingly ridiculous voice and shameful efforts in achieving some kind of accent make him completely lost in his job and his appalling performance actually ruins the whole show ; Carlos Cuevas is Salaì, Leonardo’s apprentice and trusted friend and James D’Arcy plays the role of Ludovico Sforza known as il Moro! Max Bennett will be evil Cesare Borgia,
Posted by DEZMOND at 1:00 PM