DOMINA TEASER IS HERE
FOR ANCIENT ROME SET SERIES
The fully unexpected surprise last night was the release of the first teaser and photos from new Ancient Rome set series DOMINA which will arrive to Sky this May and also on their streamer Now TV. This highly anticipated eight episode series will see Kasia Smutniak playing famous Livia Drussila, the first empress of Rome! 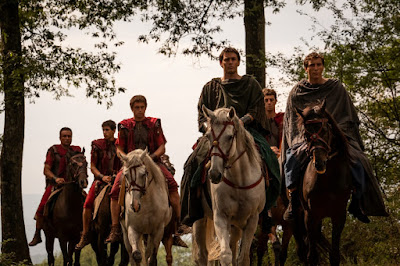 THIS EIGHT PART EPIC DRAMA
is a highly topical story, which follows the life and the extraordinary rise of Livia Drusilla, who overcame adversity to become the most powerful woman in the world. The story follows Livia’s journey from a naïve young girl whose world crumbles in the wake of Julius Caesar’s assassination, to Rome’s most powerful and influential Empress, driven by a deep desire to avenge her father and secure power for her sons. Livia and her peers navigate their way through a brutal society by means of strategy, conspiracy, seduction and murder. She will soon discover that seizing power is not enough: you must be able to keep it when everyone else wants it. This is a visceral and authentic family saga, grounded in historical accuracy and bringing to life the incredible true stories of the women who would create one of the most enduring and fascinating dynasties of all time. Check out the trailer below and tell us what you think.
WHO'LL ELSE BOW TO DOMINA?
Kasia Smutniak is playing Livia Drusilla, with the young Livia played by Nadia Parkes. They are  supported by an international stellar cast including Liam Cunningham playing Livius, Livia’s father, and Colette Tchantcho as Antigone, Livia’s best friend, ex-slave and closest ally. Created and written by Simon Burke, the series also stars Matthew McNulty as the future emperor Gaius, Christine Bottomley as Scribonia, Ben Batt as Agrippa, Enzo Cilenti as Tiberius Claudius Nero, while Claire Forlani plays Claudia Octavia. Isabella Rossellini makes an appearance playing Balbina, an early enemy.
Posted by DEZMOND at 1:00 PM