EMILY OSMENT, GREGG SULKIN TO LEAD NEW NETFLIX SITCOM! EOIN MACKEN TO LEAD CATASTROPHE SERIES LA BREA AT NBC WITH HALF OF THE CAST CHANGED FOR THE PILOT 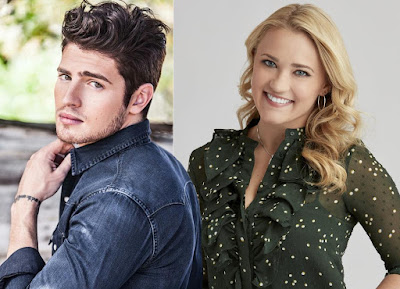 NEW NETFLIX MULTICAM
CASTS EMILY OSMENT AND GREGG SULKIN AS LEADS
Isn't that the cutest news of the week? Emily Osment will return to the world of sitcoms after Young and Hungry in an currently untitled new multi camera sitcom which just got a ten episode order over at Netflix and Gregg Sulkin will take the male lead. This is not the first time two of them are working together. With Jack Dolgen and Doug Mand as the show creators, the new comedy revolves around a snooty, self proclaimed intellectual (Osment) forced to move in with her carefree sister and her sister’s lovably eccentric friends, one of them played by Gregg Sulkin.
Emily Osment’s character in the new comedy series at Netflix, Chelsea, is an Ivy league educated intellectual who is book smart and quick witted but lacks the real world skills she needs to have a functional life. She finds herself living in LA without any options other than her bubbly sister, Claire, and Claire’s roommates.
Meanwhile, Gregg Sulkin’s character in the new series, Grant, is romantic, genuinely sweet, and an often shirtless personal trainer. He has a childlike curiosity about the world and is the kind of guy women love and men… also love! He used to date Claire, but now they’re “just friends.”
EOIN MACKEN
TO LEAD NBC'S LA BREA SERIES
NBC is moving on with the producton on the pilot for their catastrophe series  LA BREA but they've replaced the male lead (and a few other roles) and put our fave hunkster Eoin Macken opposite Natalie Zea. Jack Martin, Jon Seda, Veronica St. Clair, Chiké Okonkwo and Lily Santiago will also star together with Zyra Gorecki.
When a massive sinkhole mysteriously opens in Los Angeles, it tears a family in half, separating mother (Zea) and son (Martin) from father (Macken) and daughter (Gorecki). When part of the family find themselves in an unexplainable primeval world, alongside a disparate group of strangers, they must work to survive and uncover the mystery of where they are and if there is a way back home.  Macken will play Gavin Harris, Eve’s recently estranged husband, full of swagger and charm. Jack Martin is Josh Harris, Gavin’s son who coasts through life on his wit, has great sense of humor and an undeniable charisma. Jon Seda will play Dr. Sam Velez, the father of a teenage girl (St. Clair), he carries himself like the general of an Army.
Posted by DEZMOND at 1:00 PM