LIBERTAD EPIC TV SERIES
COMING FROM SPAIN IN MARCH
Here's the latest period set project coming to us from Spain: five episode historical series LIBERTAD will arrive to Spanish streamer Movistar this spring, March 26th set in the 19th century Spain. Earlier this winter Movistar scored success with another period set series - time spanning saga Tell Me Who I Am, and now they will try their luck with this series which features mostly outdoor scenes and had finished production exactly a week before the national lockdown was proclaimed in Spain last March. At the same time, while the new series is airing over at Movistar, a two hour movie will be released in cinemas ahead of Easter so the audience can pick which format to watch. They are hoping the release will give a boost to Spanish flagging box office. 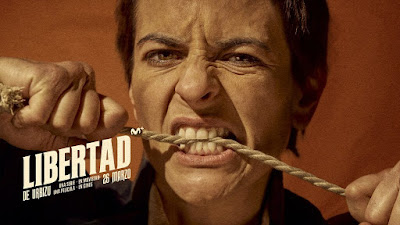 THE STORY OF LIBERTAD
A woman nicknamed La Llanera (played by Spanish singer Bebe) is released in 1807, in the wake of the French revolution (which inspired Spain to proclaim Spain a constitutional monarchy in 1812), from prison after 17 years spent in it. During her confinement, she had been sent to the gallows every year only to be pardoned at the last moment. Her son Juan (Jason Fernandez) was born in the cell and does not know his father, the famous bandit Lagartijo (Xabier Deive). Mother and son will try to live the freedom that has been denied to them for so many years while they are persecuted by gangs of bandits and gunmen of the Governor. Lagartijo, Aceituno (Isak Ferriz) and the Governor (Luis Callejo) are looking for La Llanera, but they are also looking for each other. In 19th century Spain there is no room for everyone, much less for traitors.
Posted by DEZMOND at 1:00 PM