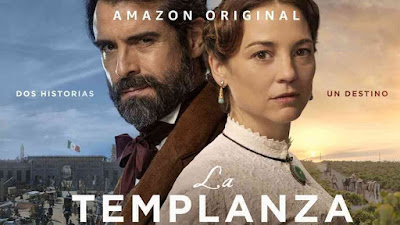 VINEYARD TV SERIES
AMAZON'S NEW COSTUME DRAMA
Just as I promised you last week, today I'm bringing you a third period set series coming from Spain to arrive to the small screens this year. And VINEYARD (La Templanza) is arriving as soon as March 26th and since it will stream on Amazon Prime it will probably be available to the world wide audiences who have the streamer in their countries. This ten episode costume drama, starring Rafael Novoa and Leonor Watling and based on the novel by María Dueñas, brings a romantic story set in 1860 against the backdrop of different historic world cities. As you can see from the photos and from the trailer below, the series will be abundant in extremely opulent costumes and historical sets of the era.
THE VINEYARD IS SET
at the end of the 19th century. Soledad Montalvo and Mauro Larrea are a self-made woman and man whose destinies are about to converge in a fascinating time and place. The period production promises to be a tale about overcoming adversity and finding our place in the world, as well as a story about how to build an empire and lose everything in one day, about adventures in exotic lands and second chances.
THE SERIES IS DIRECTED BY
Guillem Morales (Julia's eyes), Alberto Ruiz Rojo (El Cid) and Patricia Font (People who come and bah). Susana López Rubio (El tiempo entre costuras) has led the writing team of a Boomerang TV production that will tour the tumultuous mining communities of Mexico in the 19th century, the elegant halls of the exclusive London society, the Cuba of the slave trade and the most valued wineries in the world in Jerez
.
Posted by DEZMOND at 1:00 PM