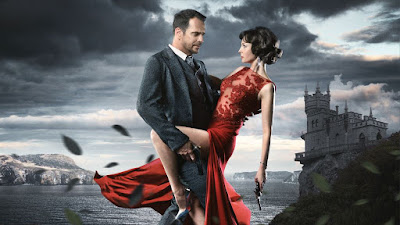 NEW SHERLOCK TV SERIES
THE RUSSIAN CHRONICLES
Two TV delights coming from Mother Russia for you this weekend, starting with SHERLOCK THE RUSSIAN CHRONICLES (Шерлок в России)which hits Russian streamer Start.ru from October 22nd!  The eight episode series will see Maksim Matveyev playing famous detective Sherlock Holmes who is chasing a killer over in 1880's Saint Petersburgh. The high end series is directed by Nurbek Egen.
SHERLOCK: THE RUSSIAN CHRONICLES sees Sherlock Holmes travelling to Russia alone, without his close friend Watson, in order to catch Jack the Ripper, whom Sherlock has been chasing from the U.K. Watson can’t travel with Holmes, since the good doctor was wounded by Jack the Ripper a few days prior to his escape. Sherlock writes to Doctor Watson from Russia every day. In these letters he tells his friend about his experience in Russia and his impressions of the country. Things don’t go according to plan, of course… In Russia, he meets Doctor Kartsev (Vladimir Mishukov), from whom herents a room. Dr. Kartsev starts helping him solve very strange, confusing, and complicated crimes, and Holmes is once again forced to convince law enforcement authorities of the correctness of his deductive methods of investigation. Irina Starshenbaum plays Sofia who helps them in their work.
FERRARI LEGEND
PERIOD SET RUSSIAN SERIES
Another Russian detective series that I have for you today already aired on their NTV earlier in January. 12 episode saga FERRARI LEGEND (Легенда Феррари) has a plot which is pure fantasy, set in Crimea, summer 1920. After the unsuccessful attempt on the life of Baron Wrangel (Alexandar Buharov) and the death of the agents of the intelligence department of the Red Army, the Bolsheviks need a new cunning plan to implement the "Crimean Mission". The best agent is appointed to this case - Elena Golubovskaya (Olga Pogodina), who is fluent in five languages. In Crimea, Golubovskaya appears already as El Ferrari - a gifted Italian poet, born in St. Petersburg. Her task is not only to physically eliminate Wrangel in order to demoralize the White Army, but also to lead the operation to steal the gold treasury of the White Guards. All plans are unexpectedly hampered by the German Maximilian Ermler (Pavel Delong), a journalist for one of the local newspapers, who turned out to be an agent of British intelligence.
Posted by DEZMOND at 1:00 PM