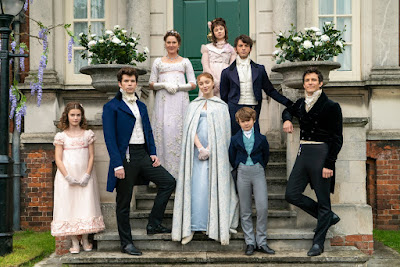 BRIDGERTON TV SERIES
TO ARRIVE THIS CHRISTMAS
Well, I'm sad to admit, but this looks even trashier than we expected and the blackwashing in it is even more brutal than we thought - they've even turned Queen of England into a black person. Of course, the book series by Julia Quinn, on which BRIDGERTON the series is based, has such a strong fandom, I don't think it will have any problem finding its viewers no matter how silly and ridiculous it looks. The eight episode Regency Era set drama will arrive to Netflix December 25th! Narrated by Julie Andrews, it follows the lives of the eight Bridgerton siblings, a wealthy family living in Regency England. Based largely on Quinn's first novel in the series, The Duke and I, the first season is tracking the story of Daphne Bridgerton (Phoebe Dynevor), as she embarks on a fake courtship with Simon, the Duke of Hastings (Regé Jean Page). Beset by influence from Queen Charlotte (Golda Rosheuvel) and societal pressures, Daphne and Simon turn to each other to try to beat the ton at their own game. But things get complicated when their fauxmance starts to feel all too real.
BRIDGERTON is set in the sexy, lavish and competitive world of Regency London high society. From the glittering ballrooms of Mayfair to the aristocratic palaces of Park Lane and beyond, the series unveils a seductive, sumptuous world replete with intricate rules and dramatic power struggles, where no one is truly ever on steady ground. At the heart of the show is the powerful Bridgerton family. Comprised of eight close knit siblings (each of them has one of the eight novels set between 1813 and 1827 dedicated too them), this funny, witty, daring and clever group must navigate the upper ten thousand’s marriage mart in search of romance, adventure and love.
WHO ELSE IS IN THE CAST?
The rest of the Bridgerton clan includes Ruth Gemmell as matriarch Lady Violet; Jonathan Bailey as eldest child Anthony; Luke Thompson as sensitive Benedict; Luke Newton as charmer Colin; Claudia Jessie as independent Eloise; and Ruby Stokes as shy Francesca. The youngest siblings, Gregory and Hyacinth, are still children when we first meet them and will be played by Will Tilston and Florence Hunt, respectively. Polly Walker is Lady Portia Featherington, perhaps the most ambitious mama of all, determined to make advantageous matches for each of her daughters – and is forever pushing them on some rather disinterested parties. Cunning and ruthless, Lady Featherington hustles to get what she wants, no matter the cost. Sabrina Bartlett, Ben Miller, Bessie Carter, Harriet Cains, Lorraine Ashbourne and Martins Imhangbe also star. We expect that the first trailer for the new eight episode historical saga produced by Shonda Rhimes should arrive sometime soon and I shall paste it here as soon as that happens if you are, of course, still interested in watching it after seeing all the colourful trashiness in these first photos!
Posted by DEZMOND at 1:00 PM