IT'S A VIOLENT TURN OF THE CENTURY IN EPIC NEW OKTOBERFEST: BEER AND BLOOD TV SERIES STREAMING FROM TOMORROW AT NETFLIX 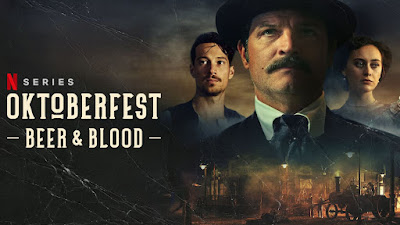 OKTOBERFEST: BEER & BLOOD
BEER WILL FLOW FROM TOMORROW OVER AT NETFLIX
The marketing this one has (or hasn't at all) received from Beta Film and Netflix was so bad that we weren't even informed that new German language epic series OKTOBER FEST: BEER AND BLOOD starts streaming over at Netflix from October 1st. It apparently already aired in Germany and parts of Europe even though it does not even have an English language trailer yet. The six part series about the fierce battle between two family breweries from 1900 Munich, has Mišel Matičević, Martina Gedeck, Klaus Steinbacher and Mercedes Mueller in the cast. When a new player arrives in 1900 Munich, the balance of power between the brewery bosses is upset, resulting in an all-out bloody war among the city's “beer mafia” that will lead to the end of the Oktoberfest as the residents of Munich have known it for nearly a century.
OKTOBER FEST IS SET IN 1900. Munich's Oktoberfest. A traditional annual celebration of the long since faded Bavarian royalty. After already running for nearly a century, it is a major source of income – especially for the city's brewery bosses. Many are reliant on the profits made from selling beer at the Oktoberfest, as is the small family brewery headed by Ignaz and Maria Hoflinger (Francis Fulton Smith and Martina Gedeck). When Curt Prank (Misel Maticevic), a new player, comes to town, his ruthless acquisition methods upset the balance of power. Resisting his shadowy buy-out, Maria soon pays a bloody price for sticking to her guns. The thirst for revenge leads to a devastating and vicious war breaking out among Munich's beer mafia, revealing the ugly face that lurks behind the festive façade of the Oktoberfest. Yet in the chaos, a forbidden love between Maria's elder son and Curt's beautiful daughter is blossoming…
Posted by DEZMOND at 1:00 PM