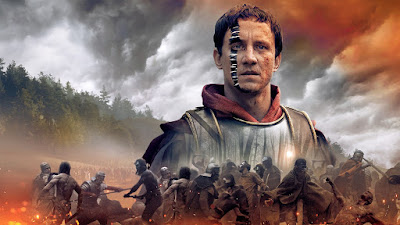 BARBARIANS TV SERIES
BRINGS BATTLE TO NETFLIX AS SOON AS NEXT WEEK
Most of Europe's cinemas are being saved this year by domestic or European films while corona is wrecking chaos around the world (we've been able to watch a lot of Russian, French, Italian, Spanish hits this year here) and it is rather obvious that European series will save Autumn and Winter season on the small screens as well. Beside wonderful German Oktoberfest: Beer and Blood and French La Revolution which have already hit Netflix, another epic series that is hitting the streamer this month is BARBARIANS arriving also from Germany October 23rd with six episodes! You can check out the magnificent trailer below the plot of the series and tell us what you think!
THE STORY OF BARBARIANS
follows three people whose fates are interwoven in the legendary Battle of the Teutoburg Forest in 9 A.D., during which Germanic warriors halt the spread of the Roman Empire. At the centre of this bloody clash are three childhood friends who are linked by a tragic fate. They become the all-important force in the fight against the superior Roman power. Thier path is marked by loyalty and betrayal, love and hate - and ultimately proves to be a dramatic test of a friendship between three young people. The Cheruscan prince's daughter Thusnelda (Jeanne Goursaud) and the simple warrior Folkwin (David Schütter) are secretly a couple. But soon the two are challenged in a completely different way: the Roman occupiers under governor Varus (Gaetano Aronica) extort crushing tributes from the Germanic tribes, which hate each other too much to defend themselves together. Thusnelda and Folkwin decide to act on their own and humiliate the empire in a daring night-and-fog act. To avenge the shame he suffered, the Roman governor sends out his foster son. But the young Roman officer (Laurence Rupp) has a secret that connects him closely with Thusnelda and Folkwin. Torn between the two hearts that beat in his chest, the young man has to choose one side - and betray the other. The three become the driving force behind the uprising, which unites the quarrelling tribes into an army. Together they deliver a final battle to the superior Roman superpower, which will also change the lives of the three friends forever.
Posted by DEZMOND at 1:00 PM