'THE ENGLISH GAME'
NEW SHOW ARRIVES MARCH 20TH
Well, it seems, people, March will finally bring us long awaited period set delights, beside Belgravia (March 15th) and Letter for the King (March 20th), you will also enjoy THE ENGLISH GAME which Netflix will stream in all
its six episodes from March 20th as well. Like Belgravia, this new period set series also comes from Julian Fellowes following the beginnings of soccer in Britain in the mid 19th century. 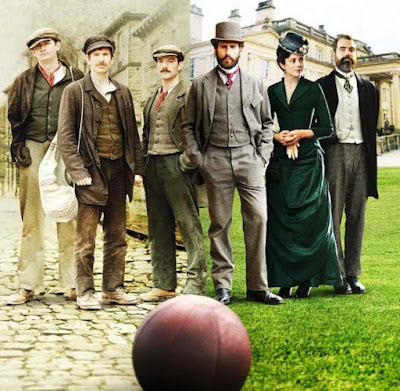 The English Game
will be a six part series set in the 1800s and will describe how the world's most popular sport of football crossed class lines and became a worldwide phenomenon despite its humble beginnings on the pitch at London’s Limes Field!
Who Is On The Football Field?
The male part of the cast is exquisitely strong led by two of our dear hunks Edward Holcroft (as Arthur Kinnaird – known as the ‘First Lord of
Football’) and Kevin Guthrie (as Fergus Suter from Glasgow, who is often considered the first recognised professional footballer) next to Craig
Parkinson, Ben Batt, Henry Lloyd Hughes, Gerard Kearns and Daniel Ings! Jamestown star Niamh Walsh leads the female part of the cast
alongside Kate Phillips and, sadly, Charlotte Hope (who judging by the trailer, is as bad here as she was scandalously atrocious in the god-awful
Spanish Princess). It is interesting that the actors who play the footballers trained at Trafford Training Centre in Carrington, the training ground of
Manchester United. They had to play in the 1880s style that is different from the game today. Check out the beautiful trailer below and tell us what you think: